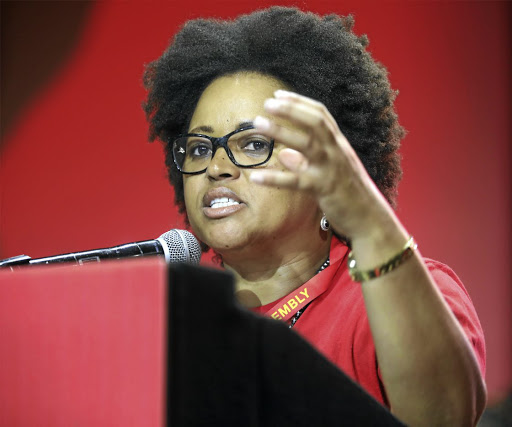 The position had been long earmarked for Malema's close ally Marshall Dlamini as it appeared on the slate which was associated with the party leader. The student wing along with Chirwa lobbied and nominated Mashego for the position which she accepted nomination for.

Speaking to Sowetan, Mashego who lost to Dlamini, said the decision to contest Malema's ally, was aimed at being a "little defiant" not against the party but in protection of her democratic right.

She said if that decision becomes her downfall she would take it on the chin.

"I think that if it's a sacrifice that I had to make, I'm happy to have made it, I'm extremely happy that I made it and if it had an impact, even if it's two percent, I'm even happier on women in particular and black women," Mashego said.

Referring to herself as a "mavul'indlela" (pathfinder), Mashego said she took that decision to show women that it was okay to not be scared.

EFF's newly elected top six is without two former leaders Dali Mpofu and Godrich Gardee who have one thing in common - they are both over the age of ...
News
2 years ago

"Anywhere where there's competition black women are always the ones being suppressed indirectly or directly from contesting anything then it results in fear, self-esteem issues (sic).

She said she was aware that the decision left some few people from the conference with bruised egos.

"I think egos got bruised and I think sensitivities got touched because people had their own views and others had different views and they felt that I should contest and I did that.

"In protection of that democratic right and that is the most important thing that I wanted to emphasise. "

Malema, seemingly reacting from the developments at the conference, later took a swipe at Chirwa for thanking prophet Shepherd Bushiri after becoming an MP.

The tensions played themselves out in public at the party's second national people's assembly where Malema hinted that Chirwa may have landed herself in hot water.

"Don't go to church and thank God for these positions. They are not yours... once you do that you are personalising it, it belongs to you," Malema told the almost 4,000 delegates.

"That is why the day we ask back of our chair you cry like a little baby because in your imagination it was given to you by Papa [Bushiri]. Don't do that, don't claim EFF positions as an achievement. Never celebrate an election in the EFF."

Mashego said it would be "unfair" to directly link Malema's remarks to the fact that Chirwa lobbied and nominated her.

EFF spokesperson Mbuyiseni Ndlozi had not responded to Sowetan's request for comment by deadline.

Adam Catzavelos, the man who went on a racist rant on video last year, has been summonsed by authorities in Greece.
News
3 years ago

Malaika singer Tshedi Mholo's nasty fight with her neighbour over a gate at her home of 12 years has ended in court.
Entertainment
3 years ago
Next Article