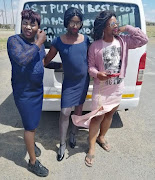 The alleged perpetrator, the victim's former boyfriend, handed himself over to police after the killing and is due back in court on January 8.

Four Free State taxi drivers are trending on social media after they went to work last week dressed as women in a bid to highlight gender-based violence.

Speaking to SowetanLIVE's sister publication TimesLIVE on Wednesday, Mosala Mabeleng said it was losing a childhood friend to a gender-based crime that made him want to make a statement about the difficulties that women go through.

His friend was 24-year-old Pontsho Penene.

“She was stabbed to death, on the neck. She was stabbed several times. She and her attacker broke up a while ago and he kept insisting that they get back together, despite the fact that he had moved on and was with someone else. He would attack her whenever he would see her with a man,” said Mabeleng.

The alleged perpetrator handed himself over to police after the killing and is due back in court on January 8.

Mabeleng, who is a driver from the Botshabelo taxi rank, known to the community as the Blue taxi rank, said he and his colleagues were disturbed by the growing scourge of violence against and killing of women.

“It has been prominent, especially this year,” he said.

Arriving at the taxi rank in wigs, dresses, lipstick and handbags, Mabeleng said to many of the taxi drivers, they were a joke.

“Some saw it as a joke, but others could see where we were coming from. Some called us names but in the end, many of them regretted not joining us,” he said.

“As the day commenced, I saw even those who were mocking us easing up a bit. They joined us as we paraded around the Botshabelo Mall,” Mabaleng added.

He said the passengers were mostly impressed.

“The passengers were happy. From the rank until they got off, my attire was the topic. It was a good thing, it was a good feeling. Some of the women were saying that we looked even better than them,” he laughed.

Mabeleng highlighted that taxi drivers did not have a good reputation but he had personally never seen a women being insulted at the taxi rank where he worked.

He said he had heard about incidents at the neighbouring taxi rank though.

“I have heard of incidents happening of women being insulted, others abducted and raped by taxi drivers. All of this ruins the reputation for taxi drivers and gives a bad name to the industry and men,” he said, adding that they were ashamed of such incidents.

Mabeleng said them dressing up in this manner did have an impact, but more needed to be done.

“It was not enough. We want to make this a movement,” he said.