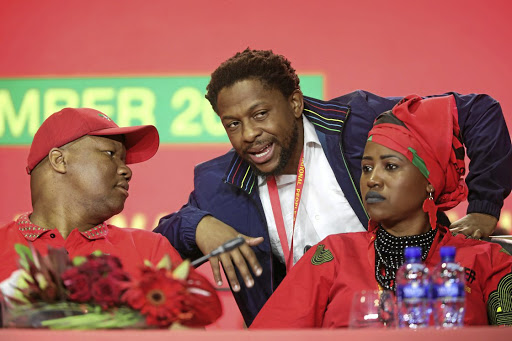 EFF's newly elected top six is without two former leaders Dali Mpofu and Godrich Gardee who have one thing in common - they are both over the age of 50.

The red berets' new leadership elected at the party's four-day national people's assembly in Nasrec, south of Johannesburg, at the weekend has an average age of 40.

Mpofu, 57, who contested Shivambu for the deputy president position, did not meet the required threshold to stand while Gardee, 51, declined a nomination to get re-elected as secretary-general.

Party leader Julius Malema, 38, who was re-elected as the commander-in-chief, won big after the almost 4,000 delegates elected his preferred crop of leaders in the top six.

The obvious question though had to be about age. Did former party chairperson Mpofu and former secretary-general Gardee lose out because of their ages? Party spokesperson Mbuyiseni Ndlozi doesn't think age was a factor.

Julius Malema will lead the EFF for at least the next five years.
News
2 years ago

Ndlozi said that the election of the new younger top six had nothing to do with their age, but their reliability and ability to visit all branches.

"It has nothing to do with age, it has everything to do with the fact that these comrades have demonstrated incredible reliability, but also commitment to the organisation and have proven themselves capable to preside over complex projects. You don't have to babysit them," Ndlozi said.

The party's chairperson in Gauteng, Mandisa Mashego, said there were older people in the 40-strong central command team who included Makoti Khawula.

"It reflects more on the societal demographic picture because the average age of the population is coming down, especially in the rest of Africa," Mashego said.

Malema said that Gardee would head a unit tasked with coordinating EFF structures in Africa.

“Don’t kneel before me. I don’t want that,” were the strong words by the newly re-elected EFF leader Julius Malema to delegates who knelt before him ...
News
2 years ago

The EFF wants a total ban of alcohol advertisements in SA. This was one of the resolutions taken by the party delegates at its three-day assembly ...
News
2 years ago

Four women delegates at the EFF elective conference had to be rushed hospital in the early hours of Sunday morning after being hit by pepper spray.
News
2 years ago
Next Article