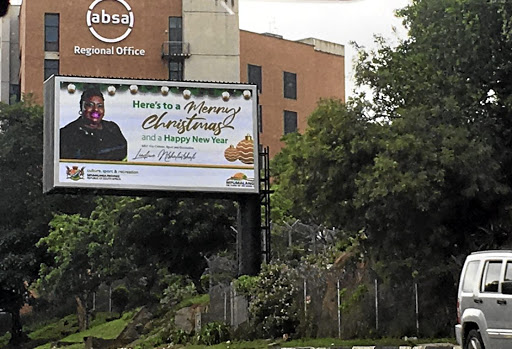 A billboard placed on the Samora Machel road in Mbombela CBD led to sports, arts and culture MEC being chastised and called a power monger./MANDLA KHOZA

A billboard with a Christmas message from Mpumalanga MEC for sports, arts and culture Lindiwe Ntshalintshali has caused a furore.

Ntshalintshali was chastised for the billboard on Samora Machel Drive in Mbombela.

The billboard bears her face, the department and provincial government's logos and she wishes citizens a merry Christmas and happy New Year.

Politicians aligned to premier Refilwe Mtsweni-Tsipane have now questioned the expenditure on the billboard, also saying it should be Mtsweni-Tsipane's face on it and not Ntshalintshali's.

However, Ntshalintshali defended the billboard, saying: "People are trying to politicise this. I actually posted my well wishes on my Facebook wall and a businessman who does billboards asked to use my well wishes [and make the billboard] at no charge and I agreed.

"People therefore think I want to be premier... it's not true and the department spent no money for that," said Ntshalintshali.

Maphindi Ngwenya, who owns the company that made the billboard, confirmed that they did it for free but they didn't know that it would start an uproar.

"We offered to them for free. It's about two lines [and] we didn't charge them. [It was] a good gesture that's all... this has nothing to do with politics, this department supported us from the cultural experience and we decided to do it for free as local guys," said Ngwenya.

Spokesperson for the office of the premier, Sibongile Mkani-Mpolweni, said they didn't know about the advertisement.

"We only learnt about it from the media. For now we have not come to a conclusion on what [will] be done," said Mkani-Mpolweni.

She said the logo of the provincial government was removed from the billboard.

"The EFF's view is that this act is pure corruption and gross violation of the law precisely because the law only permits the first citizen or the city mayor to put such an advert not any Anna, Sophy or Margaret," Sedibe said.

"The EFF calls upon the premier of Mpumalanga to personally give her an order to remove the advertisement with immediate effect and be personally held liable for all the money used for this advert."