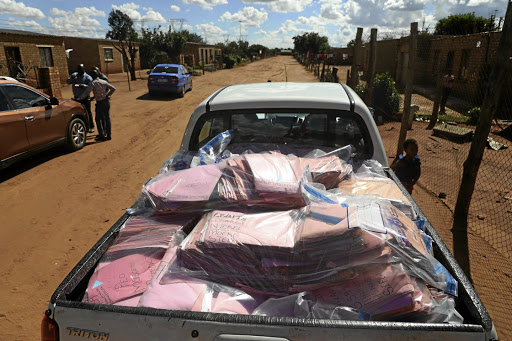 Hawks conducted a search at a Klerksdorp company after allegations that it defrauded ex-miners and beneficiaries of their silicosis compensation money.
Image: Thulani Mbele

Hundreds of former mineworkers, who have had successful claims in the landmark R5bn silicosis class action, have been duped of some of their monies.

On Wednesday, the Hawks swooped on business premises in Klerksdorp, North West, to conduct a search and seizure operation after hundreds of ex-miners and beneficiaries alleged that they had been swindled of their compensation claims.

According to the ex-miners and beneficiaries, they were approached by individuals from a company which promised to help them fast track their claims following the historic silicosis settlement.

The complainants told investigators that up to 40% of their claims were taken by the company whose name has been withheld until formal charges have been pressed.

North West Hawks spokesperson Capt Tlangelani Rikhotso confirmed that Wednesday's operation was part of an ongoing investigation into claims made by the former miners and their beneficiaries on the discrepancies on their claims.

Rikhotso said no arrests have been made at this stage.

Sources close to the investigation said the company touted and acted as an intermediary for claimants and beneficiaries involved in the silicosis class action.

At least 36 victims have reported to police how they were duped into paying money to companies that promised to fast track their claims.

The intermediaries allegedly colluded with some employees of the Competition Commission of Occupational Diseases by providing them with details of claimants so the company could approach them.

"They would go to claimants and tell them that they could speed up their claims for them without telling them how much they will take from them," said a source.

He said that the number of cases could run into hundreds.

The alleged syndicate companies operated in the North West, Eastern Cape, Western Cape and in Mozambique, targeting former mineworkers and their dependants.

One of the victims of the alleged scam run by the Klerksdorp company, Kelebogile Brown, said an agent of the company took R10,000 from her father's R43,000 payout.

Her father Solly Msimango was a mineworker at the Vaal Reefs Gold Mine in the North West from 1984 until 2006.

"He was retrenched after he was diagnosed with silicosis and he died three years later. We were left poor because he was the breadwinner. Our claim came out and they took more than I thought they would and it was for nothing," Brown said.

Another victim Maki Mabunda, 73, whose son, Ben Mabunda died as a result of silicosis said she was left heartbroken after the company took R60,000 of the R100,000 that was due to her.

"I was approached by one of them [agents] and they said they would help me with getting my son's money. That money was meant to take care of Ben's two children," Mabunda said.

The department of health's spokesperson Forster Mohale said a number of claimants and ex-mineworkers associations have complained about touts harassing beneficiaries.

"The NDOH requested that they lay charges at the SA Police Service or law enforcement agencies. Thus the search and seizure operation by the Hawks is welcomed and shows that perpetrators of fraud against claimants of compensation for occupational lung diseases will not be tolerated," he said.

Tshiamiso Trust, which is responsible for facilitating payments to the beneficiaries, said they were made aware of the fraudulent efforts by individuals and companies. The trust's spokesperson Alan Fine said the fraudulent activities included charging beneficiaries for a number of services.

"These activities include charging for assisting them to register an interest in lodging a claim and charging them a fee to transport them to Johannesburg to do so. We became aware of this through patterns of registrations that we noticed from monitoring the site (https://silicosissettlement.co.za/register)," Fine said.

Hospitals get rid of husband's files
News
2 years ago