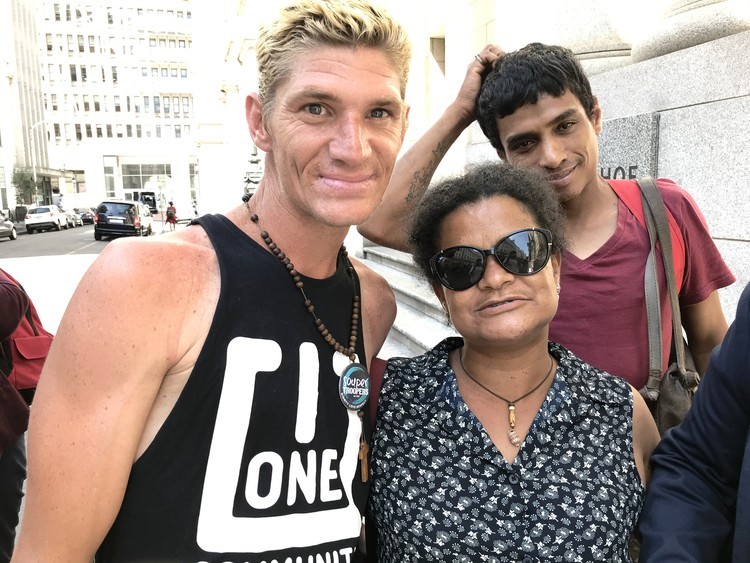 Shaun Strydom, Carin Gelderbloem and Rameez Kemp, who live on the streets in central Cape Town, outside the high court in Cape Town on 12 December 2019
Image: GroundUp/Western Cape News/Steve Kretzmann

An appeal is on the way after a court decision which the City of Cape Town says prevents it dealing with homeless people who sleep on the street.

The city council suffered a legal setback on Thursday when a Cape Town high court judge extended an interim interdict preventing law enforcement officials interfering with the property of homeless people or harassing them.

Acting Judge Bernard Martin was expected to rule on whether to scrap the interim interdict or make it permanent. But he surprised legal teams acting for seven homeless people and the city council by declining to do so.

JP Smith, the mayoral committee member for safety and security, said in a statement the council had no alternative but to consider an appeal.

"The city is disappointed about the ruling and the manner in which the judge arrived at the ruling," he said.

The row between homeless people and the City of Cape Town comes to a head in the high court on Thursday, when six women and a man who live on the ...
News
1 year ago

"The judge rejected a draft order which was arrived at by the parties after careful consideration and deliberation between themselves, and which allowed for a dispute resolution mechanism to safeguard street people against claims of alleged harassment and abuse by law enforcement officials, while at the same time not preventing law enforcement officials from applying and enforcing the relevant by-laws."

Smith said under the court order, the council could continue issuing fines to anyone, include people living on the streets, who contravened the two by-laws.

"The city remains committed to supporting street people to build a life off the streets and to this effect it has already implemented numerous initiatives to provide social and other support, for example temporary work opportunities through the Expanded Public Works Programme, and the launch of the Culemborg Safe Space," he said.

The clash between City of Cape Town law enforcement officers and homeless people made front page news in July when municipal courts issued 87 arrest warrants for homeless people. The previous month they issued none, according to an affidavit by council safety and security director Richard Bosman.

Headlines at the time referred to “Cape Town’s mean streets”, social media commentators went into meltdown over the actions of law enforcement officials, and the Human Rights Commission stepped in.

Lawyers working for free on behalf of the seven homeless applicants negotiated a compromise “consent order” with the council legal team on Thursday, but Martin said it did “not meet the overriding interests of justice”, adding that the courts were not there to act as a “rubber-stamp”.

One of the seven applicants, Carin Gelderbloem, ended up on the streets eight years ago after her husband died and she could no longer afford the rent on her home.

Two people have lost their lives with hundreds displaced as a result of floods which have swept away over 700 shacks in Mamelodi, Pretoria.
News
1 year ago

“We could not stop the fire. Many of us were unable to save anything from our rooms. Our clothes and food went up in flames,” says Sli Radebe.
News
1 year ago

She said she could no longer stand to see elderly homeless people having “their cardboard ripped out from under them” at 3am.

“It’s raining and his plastic (sheeting) is taken from him. How do you do that to a person?” said Gelderbloem. She said despite the interim order, homeless people were still being harassed and chased away from the Company’s Garden and other areas.

Gelderbloem said she was happy with Martin’s order as “anything that can protect us as homeless people is good, especially for older people”.

Shaun Strydom, who has been homeless for almost five years, said he still has his clothes, bedding and food stolen by Cape Town Central City Improvement District officers “all the time”.

Rameez Kemp, who has been on the streets for four years, said he now sleeps in De Waal Park. Because it was semi-private, he was not harassed as much.