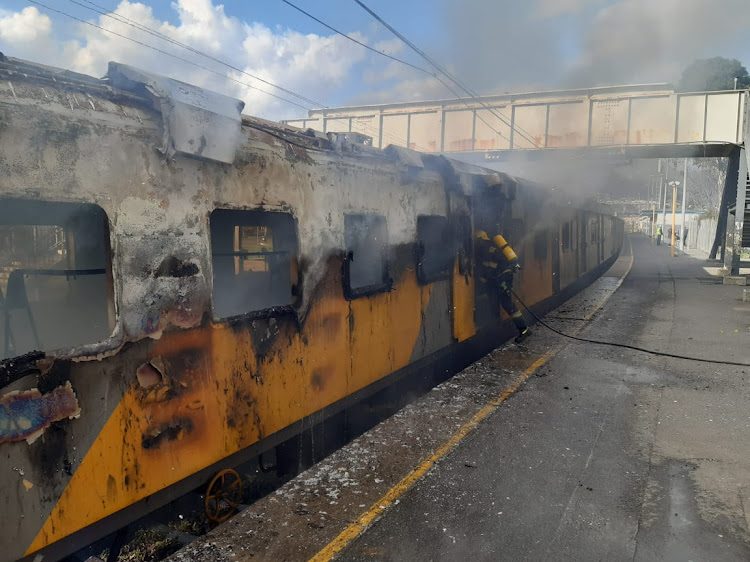 Police believe two teenage boys, aged 14 and 15, are the main suspects behind the attack.
Image: Supplied

After releasing CCTV footage from the aftermath of the torching of Cape Town trains, police believe they have nabbed those behind the attack.

Western Cape police said on Wednesday they had arrested two teenage boys, aged 14 and 15, who are believed to be the main suspects behind the torching of 18 train carriages last month.

The boys were “recognised” by a community member who saw CCTV footage of the arson attack, which was circulated on social media, said Brig Novela Potelwa.

Metrorail had offered a R100,000 reward to anyone who could assist them in identifying the suspects.

It was not immediately clear whether the community member had claimed the cash.

Metrorail on Monday released CCTV footage of two people believed to be connected to a train fire at Cape Town station on November 28.
News
2 years ago

“A 14-year-old suspect was subsequently arrested in Elsies River. Detective investigations led the police to another suspect, a 15-year-old in Delft, who was also arrested,” said Potelwa.

The boys appeared in a Cape Town court on Wednesday.

“[They] were remanded in juvenile custody until their next court appearance on January 9 2020,” said Potelwa.

It was believed the commuter train operator tallied the cost of the damage to R61m.

An “unprecedented” arson attack at Cape Town’s rail network hub in the city centre was in retaliation for the cancellation of “irregular” security ...
News
2 years ago

Western Cape transport MEC Bonginkosi Madikizela criticised the national government on Thursday for being "territorial" with the investigation into ...
News
2 years ago
Next Article