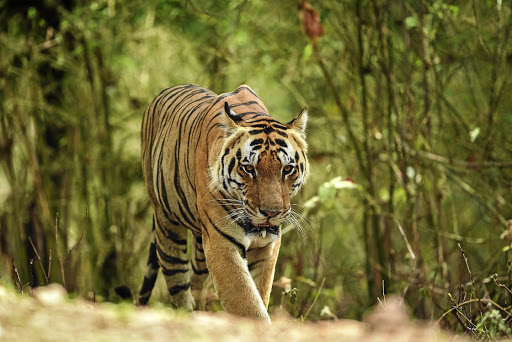 The NSPCA has laid criminal charges after finding 51 tigers kept in unhygienic conditions at a game farm outside Klerksdorp.
Image: 123RF/sourabhbharti

The National Society of SPCAs (NSPCA) has laid criminal charges against a game farm facility outside Klerksdorp after finding tigers being kept in unhygienic conditions and suffering from heat exhaustion.

Acting on a tip-off, NSPCA inspectors undertook an inspection of the farm in North West on November 28 where they counted 51 tigers.

The animals appeared to be suffering from heat exhaustion and were living in dirty and unhygienic conditions – it was evident that their enclosures had not been cleaned for some time.

“Other issues found included tigers being confined with unpotable drinking water, inadequate shelter, and a lack of bathing facilities,” the NSPCA said in a statement.

It said the Hawks had taken over the investigation, as this had become a high priority case.

The society said tigers were not fully adapted to handle the high temperatures that are common in North West during summer. It said the onus was therefore on the owner to provide an environment conducive to the animals’ welfare, no matter the cost or inconvenience.

The National Council of SPCAs (NSPCA) is to take legal action over the controversial export by ship of an estimated 57,000 sheep destined for the ...
News
2 years ago

“To keep tigers in these conditions is unacceptable, and this is a prime example of why we should not be keeping exotic species in SA, or any wild animal in captivity for that matter,” said Douglas Wolhuter, manager of the NSPCA’s wildlife protection unit.

The NSPCA said the confinement of the tigers was not only in violation of the Animals Protection Act, but the owners also appeared to be in contravention of the keeping permit that was issued by the permitting authority, the North West department of economic development, environment, conservation and tourism.

The keeping permit requirements include that the animals should have their cages cleaned daily, and that they should have potable drinking water.

The NSPCA said it has engaged twice with the department for a response and clarity regarding the perceived permit contraventions, and a way forward with the animals at the facility.

Wolhuter said it had not yet had a response.