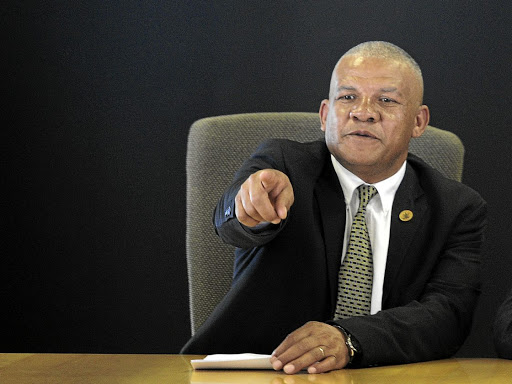 Johannesburg metro council speaker Vasco da Gama is holding on to his job, despite last week's vote of no confidence in him.
Image: Thulani Mbele

Who is the speaker of Johannesburg? Is it the DA's Vasco da Gama or was last week's motion of no confidence in him considered lawful, therefore creating a vacancy?

These are the questions that may end up in court this week between the DA and cooperative governance and traditional affairs MEC Lebogang Maile, city manager Ndivhoniswani Lukhwareni and new mayor Geoff Makhubo.

Maile believes the motion of no confidence where Da Gama was voted out with 135 votes was lawful and that the city does not have a speaker.

However, the DA has threatened court action, warning Lukhwareni to retract a notice he sent to City of Johannesburg councillors on Saturday informing them of the special council sitting. The DA argued that the 135 votes did not constitute the required majority to vote out a speaker.

DA caucus leader in Joburg Funzi Ngobeni yesterday said Lukhwareni had no authority to call a special council meeting as the motion on Da Gama was not successful.

"We have since sent him [Lukhwareni] our letter, basically saying to him that we believe that he's acting irregularly because we still have a speaker and he's the only person that can call a meeting.

"We are asking him to retract his notice to convene a meeting on Wednesday, failing which we have no choice but to approach the courts..."

On Saturday, Lukhwareni told councillors that after receiving instructions from Maile and Makhubo to convene a council meeting, he sought legal opinion which confirmed the motion of no confidence on Da Gama was lawful. "Based on the consultations and received legal advice, I am of the opinion that the requests [by MEC and mayor] are lawful and procedural and that I should carry them out," he wrote to councillors.

This, according to Ngobeni, was irregular and should Lukhwareni not retract the letter, they would take him to court in which they would also ask that he personally be liable for the costs. On Saturday, Maile wrote to Makhubo, directing him to convene an urgent council sitting to elect a new speaker as there was a vacancy following a motion of no confidence in Da Gama.

"The election of a speaker is of critical importance in order to ensure the optimal functioning of the municipal council," Maile wrote.

"As the MEC... I would advise, as I hereby do, that the municipal council convene at its earliest convenience to elect a new speaker from among the councillors so that the city can focus on its primary objective of providing basic services to its residents."