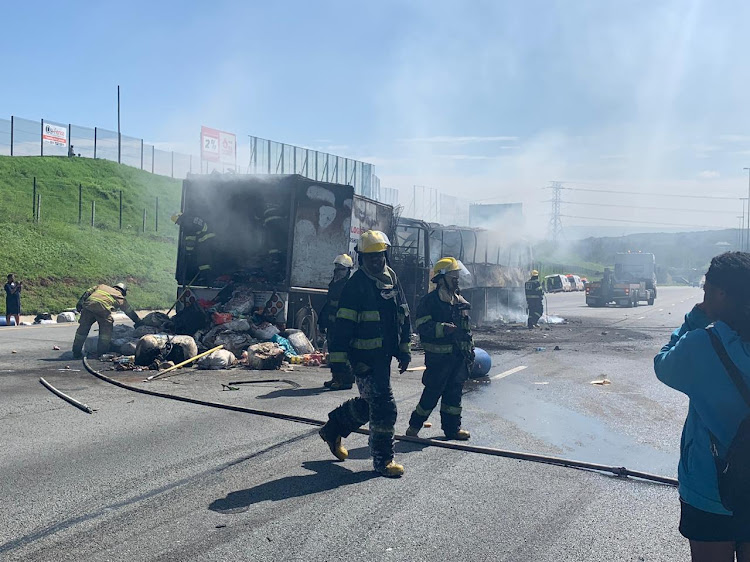 Hard-earned possessions were lost in the fire.
Image: Iavan Pijoos/TimesLIVE

Wedding clothes, toys, groceries and other valuable belongings — all gone within seconds.

Stranded passengers of a bus which caught fire on the N1 north near William Nicol Drive in Johannesburg early on Wednesday morning watched as firefighters removed their damaged luggage from the vehicle's burnt trailer.

The passengers and crew managed to escape through the windows just as the bus became engulfed in flames, said emergency services. With traffic heavily backed up on the major highway, passengers were sitting on the side of the road.

Some were barefoot, with bandages around their legs, hiding scars that nearly claimed their lives. A passenger, Albert Maphosa, said they heard a “very loud sound” and thought that a tyre had burst.

“The driver tried his best to make the bus stop. We broke the windows and got out from there,” Maphosa said. On the bus were 44 passengers including pregnant women, small children and elderly people, en route from Cape Town to Zimbabwe.

“When we were outside, we realised that the bus was burning. We tried our best to rescue the people through windows. “We lost all of our belongings, everything is gone.”

The fire was extinguished by emergency services. A few 9kg gas canisters stood a few metres from the bus. The road was littered with shoes, socks and toys. As emergency services removed the passengers' half-burnt bags from the trailer, bottles of cooking oil, small bottles of Coca-Cola and some scorched shorts fell out.

For Marieta Kariwa, it was a sad sight: two years of savings destroyed in seconds.

Kariwa works in Cape Town and was making her way back home to Zimbabwe to visit her three children for Christmas. In addition to money for basics, she had been saving to buy them Christmas clothes and toys.

Bus with passengers catches fire on N1 north in Johannesburg

A bus carrying passengers caught fire on the N1 north near William Nicol Drive on Wednesday morning.
News
2 years ago

“When the bus started catching fire, they (fellow passengers) took me through the window. I feared for my life and got out.

“When I got outside, I realised that I left my jacket behind. It had my passport and R10,000 in it. I don’t have my jacket or anything. I have nothing. My kids' clothing, their toys and all of our Christmas stuff gone,” a weeping Kariwa said.

She said she would have to return to Cape Town to work to earn more money.

“I want to go back and work for my children because they don’t have nothing now. I am a single mother of three, because their father passed away.”

Their impending disappointment weighed on her: “I don’t want to tell them that something happened, because I was supposed to arrive at home around the evening.”

Emergency services in Johannesburg battled to reach an accident scene where a cross-border bus carrying passengers had caught alight as motorists ...
News
2 years ago

A Good Samaritan, Cindy Wisser, has been running from car to car to collect water for the stranded passengers. “We really just need to help the people, because it’s really hot. They have been sitting here for how long, with the flames and fumes,” she said. Wisser had collected more than 50 bottles of water to give to the stranded passengers when SowetanLIVE's sister publication TimesLIVE was there.

Nyarai Zvikaramba said she was travelling with bags from customers. “Our business is to transport goods for people living in Cape Town. They ask us to take their stuff to their families back in Zimbabwe.

“Most of the bags had Christmas groceries.

“I was very scared and panicked. I just jumped through the window and then I thought about the kids in the bus. I then ran back and helped the kids.

“There were pregnant ladies in the bus too and some of them fainted.”