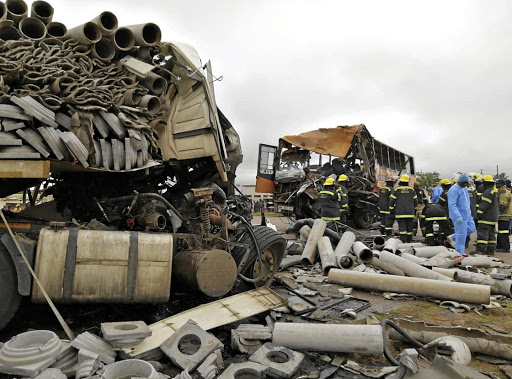 Emergency staff survey the scene of the wreckage after a crash that claimed three lives./Isaac Mahlangu

Three people were killed after an articulated truck collided head-on with a Putco bus carrying passengers on the notorious Moloto Road yesterday.

The incident happened around 6am when a truck allegedly swerved onto the oncoming traffic lane and collided with the bus in Moloto village, near KwaMhlanga, in Mpumalanga.

Two people died at the scene while the third person died at Netcare Montana Hospital, north of Pretoria, after being admitted.

A stretch of the road around Moloto village was completely closed for more than six hours after the crash with traffic redirected through the village.

According to the bus company, two of the deceased were its passengers while the third person was a passenger in the truck.

The truck was carrying concrete pillars while the bus, which was Pretoria-bound, was carrying commuters from Gemsbokspruit in the former KwaNdebele homeland.

Two people have been certified dead and a dozen others taken to hospital after an articulated truck collided with a Putco bus on the notorious Moloto ...
News
2 years ago

Njabulo Ndlovu, a bus passenger, was stitched on the right side of his face at Kwamhlanga Hospital after the crash.

"I was sitting right behind the driver and the last thing I remember was seeing the headlights of the truck as it was about to collide with the bus," Ndlovu said.

He said he assumed a brace position before a loud bang shook the bus. Ndlovu, a rental agent in Montana, has been using the Putco bus for 13 years. "I still don't know how I survived. I guess it's God and my ancestors that protected me," Ndlovu said.

He suffered several small cuts on his face and head but was discharged yesterday after being treated.

Parts of the Moloto Road that connects Gauteng, Limpopo and Mpumalanga are undergoing multibillion- rand upgrades. The road is notorious for fatal accidents often involving Putco buses, which transport hundreds and thousands of passengers from the former KwaNdebele homeland to Pretoria daily.

"We have passenger liability cover for all our passengers, in an unfortunate event of an accident... our passengers are taken to top hospitals," Motloung said.

The most dangerous parts of the notorious Moloto Road have not been upgraded because the Gauteng government has not handed it over to the national ...
News
2 years ago

Blade Nzimande has announced a number of construction projects across the country aimed at improving road infrastructure.
News
3 years ago

Gauteng department of roads and transport wants to dump a number of bus contracts on municipalities.
News
4 years ago
Next Article