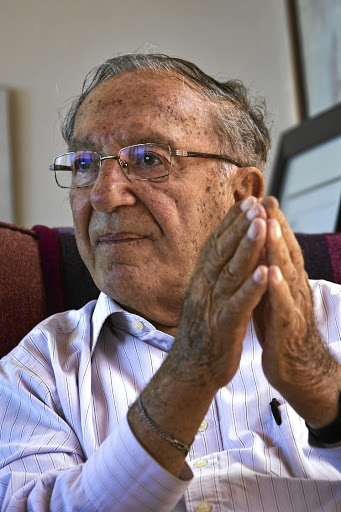 A principled man and a fountain of wisdom.

This is how the late ANC stalwart Ben Turok, who died yesterday, is remembered.

Turok died at the age of 92 yesterday morning. His son, Ivan Turok, took to Twitter detailing the kind of man he was to the family and the nation.

"He was a loyal, lifetime member of the ANC, but retained an independent perspective throughout. He asked for his death to be marked by a private ceremony, rather than anything official or formal, in view of the present predicament facing the country. His wisdom and counsel will be sorely missed," said Ivan.

An outspoken economics professor, Turok served as a member of parliament from 1995 to 2014. He distinguished himself as chairperson of the portfolio committee on ethics and members' interests.

Cartoonist Jonathan Shapiro, who is married to Turok's niece Karina, said he met him in London in the late 1980s just before the unbanning of the ANC.

"As a person when you met him, he was one of the most forthright, solid members of the movement that you could possibly find. The Struggle defined his life but he had a lovely drive, humour and everyone in the family looked up to him," he said.

Shapiro said Turok was a man who loved the outdoors and keeping fit. "He was incredibly fit. He was a great walker. He would hike and walk on the mountains. He was fitter than people half his age."

Turok was arrested in 1962 under the Explosives Act and was sentenced to three years' imprisonment in Pretoria before being placed under house arrest. He fled South Africa without his family and spent two decades in exile.

In 2011, Turok was criticised by the ANC during voting in Parliament on the Protection of State Information Bill. He sneaked out of the chambers just before the voting could take place. The bill proposed harsh penalties for journalists and citizens found to be in possession of classified documents as well as harbouring state secrets.

In an earlier interview with SABC, Turok said he believed the bill had not been debated sufficiently within the ANC.

"I will vote happily for something I believe in, however, we're not at that stage. There are too many unknown factors."

President Cyril Ramaphosa described Turok as "the only surviving member of the original underground leadership of the South African Communist Party".

President Cyril Ramaphosa has described the late Ben Turok as a principled freedom fighter who was dedicated to non-racialism.
News
1 year ago

"He was a principled freedom fighter, dedicated to non-racialism and the unity of our nation and of our liberation movement. He was a true democrat and servant of our people who stood up to injustice, corruption and the abuse of public office both during our Struggle and into the democratic dispensation," Ramaphosa said.

"Together with his wife, Mary Turok, and other comrades of his generation, comrade Ben Turok rejected the privilege and comforts of the apartheid system that could have accrued to him on the basis of his skin colour. He chose instead to fight on the side of the oppressed masses," said ANC secretary-general Ace Magashule.

"He belonged to the old stock which held the values of the Struggle... He did not care whether you are a member of the opposition or his party, if you have done something wrong he would attack you.

"If you did something good, he would commend you," Holomisa said.

There are growing signs the tide has indeed begun to turn against South African President Jacob Zuma and his supporters. The politics of patronage ...
News
4 years ago

Eminent political personalities – including two former parliamentary speakers – have criticised the degeneration of Parliament‚ warning that it could ...
News
6 years ago

Pay back some of the money: Former ANC MP Ben Turok

A former ANC MP has called on President Jacob Zuma to pay back a portion of the R246 million spent on improvements to his private Nkandla homestead ...
News
6 years ago
Next Article