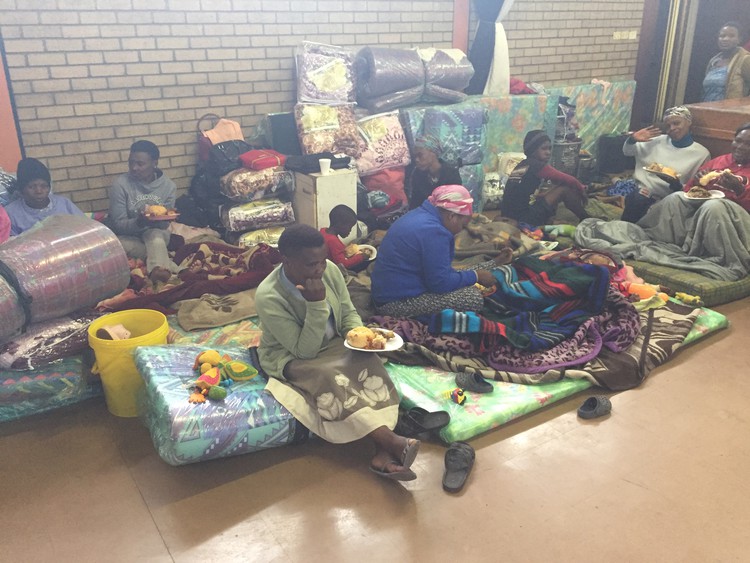 Families displaced by the fire are being housed at a nearby community hall.
Image: GroundUp/Nompendulo Ngubane

“We could not stop the fire. Many of us were unable to save anything from our rooms. Our clothes and food went up in flames,” said Sli Radebe.

She was one of the first people to raise the alarm about a fire that later gutted 97 shacks, leaving 164 people homeless in Jika Joe informal settlement in Pietermaritzburg at the weekend. The displaced group are being housed at the AF Wood community hall nearby.

According to Radebe, the fire on Saturday was started by the customer of a sex worker who lives in the settlement after he alleged she had stolen his money and cellphone.

“The guy took petrol from his car and set alight one shack before it spread to others,” said Radebe.

“My friend [sex worker] managed to run away because the community threatened to beat her up. I don’t know where she is,” she said.

A Christian organisation on Monday lost its bid to sue the eThekwini municipality for R500m due to a legal snag.
News
2 years ago

Another resident, Nobuhle Bhengu,  managed to escape the blaze with her six-month-old and the clothes they were wearing at the time.

“We’ve had numerous fires in this place. Luckily this year no one died or got hurt,” she said.

Bhengu said because most residents rent their shacks, they were liable to pay R250 at the end of the month even though their shacks had been destroyed. She pleaded with government officials to help them get better housing.

“Some of us live here because it’s closer to town, but the living conditions are terrible. There are no toilets. We relieve ourselves under a bridge, yet we pay so much for shacks. Please help us with better shelter,” said Bhengu.

By midday on Monday, several government department representatives had visited the site where dozens of people were still going through their charred belongings.

Human settlements and acting co-operative and traditional affairs MEC Peggy Nkonyeni and mayor Mzi Thebolla were among those who visited the site. Nkonyeni promised residents the Msunduzi Municipality would intervene and find emergency housing for them.

Nkonyeni agreed with Bhengu that the conditions at Jika Joe were “not conducive” as it had been declared a water-logged area.

“Together with the municipality, we will look for an appropriate place where they can be relocated,” she said.

The mayor said the Jika Joe land would be secured to prevent people from rebuilding their shacks there.