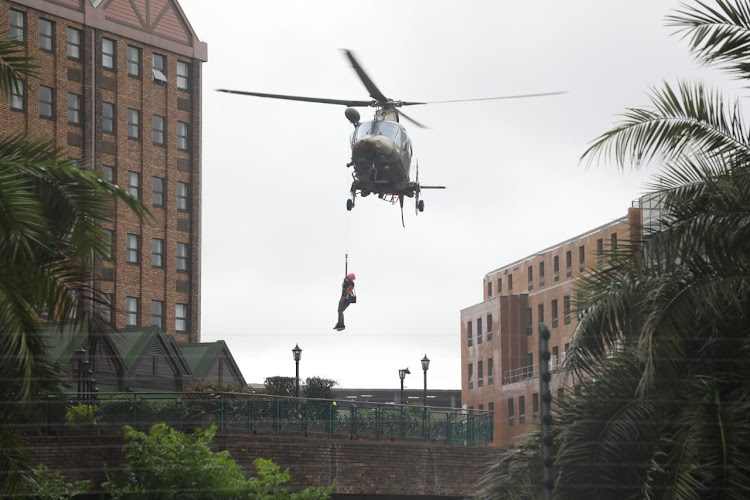 A helicopter was dispatched to rescue people in Centurion
Image: Thulani Mbele

Scores of people, including staff, were rescued and airlifted from the Centurion Hotel on Monday afternoon following floods.

DA ward counsillor Gert Visser said disaster management and emergency services were assigned to the area since 3am on Monday.

"The water pressure from the floods have caused a slight movement to the hotel building and the only way people could get out is by helicopter," said Visser.

He said 71 guests were counted before the evacuations took place, making it 80 with staff members.

Visser said 79 other people were rescued earlier from the Centurion Rugby Club which is near the hotel.

"There is an informal settlement of recyclers across Super Sport Park and their compound was swept away by the floods  this morning," he said.

Visser said the City of Tshwane disaster management, together with the Doringkloof community,  has provided accommodation for the next two nights for flood victims.

"They have been provided with food, blankets and shelter, " he said.

The body of a man who was trapped in his car when it was swept away by flood waters near Hartbeespoort Dam has been recovered.
News
2 years ago

Over 30 people were stranded at the Centurion Hotel on Monday afternoon due to flooding, while several shacks in Eerste Fabrieke, Mamelodi, have been ...
News
2 years ago
Next Article