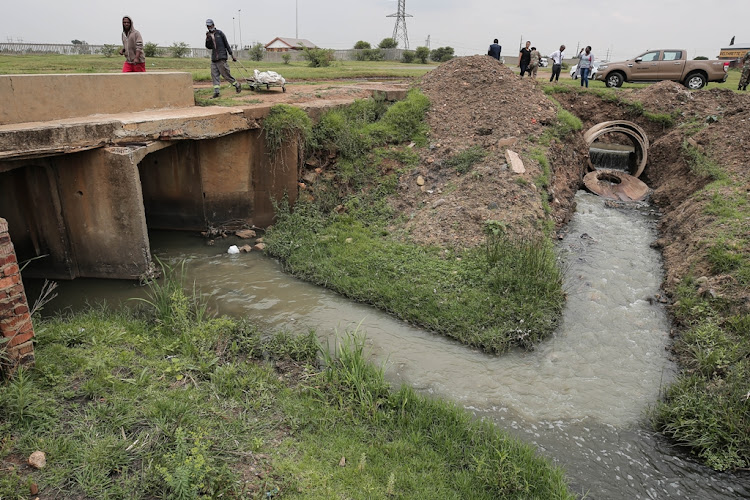 Raw sewage merges with clean water near Sharpeville, south of Johannesburg. The SAHRC on Monday ruled that three municipalities in Mpumalanga have failed to address the challenges of sewage spills.
Image: Alaister Russell

The SA Human Rights Commission (SAHRC) has called for a criminal probe into complaints against three municipalities in Mpumalanga that released untreated sewage into local water resources.

The commission on Monday said it had found that the Nkomazi, Lekwa and Govan Mbeki local municipalities failed to effectively address the challenge of sewage spills.

It had received a number of complaints relating to sewage spills and waste-water treatment challenges in the province. Complainants said the municipalities in Malelane, Standerton and Secunda violated affected communities’ right to an environment that was not harmful to their health and wellbeing.

The commission issued its report after a lengthy investigation, which included site inspections and investigative inquiries.

The Public Servants Association wants the department of labour to urgently investigate unhealthy and hazardous conditions at a building occupied by ...
News
2 years ago

It also found that the municipalities were in breach of their obligations in terms of the compulsory national standards and measures to conserve water by continuing to receive and discharge untreated or inadequately treated sewage into water resources.

The SAHRC said the Nkomazi and Lekwa local municipalities were also in breach of their obligations by continuing to accept more sewage waste into their sewer systems than the treatment plants could treat to the required standard.

Some of the challenges faced by the municipalities could be attributed to constrained capacity at existing sewer systems as a result of poorly planned and executed development, said the commission.

It has called on the provincial government to comply with its constitutional obligation to support and strengthen the capacity of municipalities to enable them to perform their functions.

“The commission has also called for the criminal investigation of the complaints against the cited municipalities, as environmental pollution is not only a violation of a right but a criminal offence in terms of the various environmental legislation,” it added.

Residents of Buntingville in Ngqeleni, who complained that they were forced to drink river water infested with raw sewage from a local high school, ...
News
2 years ago

Anyone visiting Bulawayo from next week will be surprised to hear a chorus of toilet flushes for 30 minutes every morning and night.
News
2 years ago
Next Article