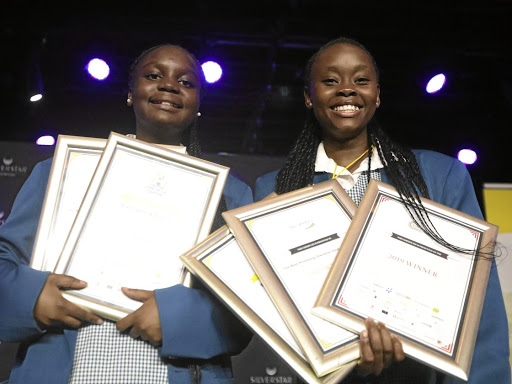 Nonjabulo Zikhali and Nolwazi Sindane were announced as the big winners of the 2019 Step Up 2 A Start Up and Smartbuck National Youth Awards.

The prestigious event was held at the Silverstar Casino in Muldersdrift yesterday.

The two grade 10 pupils at Hoërskool Secunda in Mpumalanga impressed the judges with their idea to create an app called safe space - a mental health app that educates people about depression.

"Our best friend is suffering from depression and we didn't know how to act around her. She also did not feel comfortable seeing [the help of] professionals.

"We watched the video that talks about depression and we discovered that one in five teenagers suffers from depression and that is when we came with the idea of the app," said Nonjabulo.

She said someone who is suffering from depression can download the app and register their personal details using the automated chatbox.

"Once their details are registered then a social worker or a psychologist can volunteer one hour of their time to pick out the user they want to help," she said.

The 16-year-old girls said they were excited about winning and they could not hide their excitement when their names were called. They jumped and screamed as they made their way to the stage to collect their award.

Their business studies teacher Estee Odenaal said she was very excited that her pupils had won.

"I told them that the awards were not about me but them. However, I decided to be their biggest fan. This is truly a humbling experience because we were not the only ones who entered the competition, but hard work pays," Odenaal said.

A Soweto duo have created an app to connect undiscovered football talent with local and international scouts.
News
2 years ago

The awards ceremony was organised by Primestars. There were about 12,000 high school pupils who entered the competition.

"The impact that Smartbucks and Step Up 2 A Start Up is making in the lives of our youth is made possible by our wonderful corporate sponsors who through their participation are building our youth, changing futures and ensuring that in the disruptive digital age no-one is left behind," Sweet said.

Lebo Gunguluza of Gunguluza Enterprise, who offered all pupils tokens that they can use to buy shares in various companies, said: "This will teach them how to buy shares. They will also attend a course on creating their own websites."