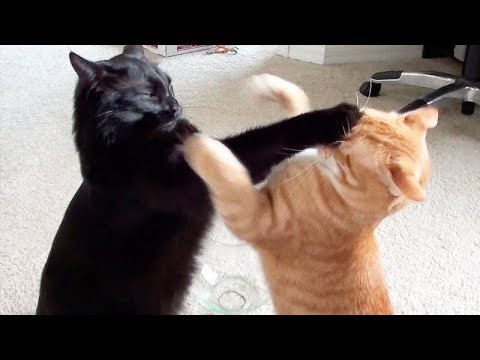 Two cats show each other what they are made of in this file picture. A policeman stationed at King Shaka Airport is in hot water over allegations that he shot a ginger cat.
Image: FILE

A policeman stationed at King Shaka International Airport has appeared in court on charges relating to the fatal shooting of a much-loved cat outside the airport's domestic terminal almost a year ago.

Leonard Buthelezi, 43, made a brief appearance in the Verulam magistrate’s court on Wednesday on three charges: discharging his firearm in a public place, cruelty to animals and causing unnecessary suffering to an animal.

He will appear in court again in January next year when he is expected to have his attorney present.

SowetanLIVE's sister publication TimesLIVE reported in January that the ginger cat, called Boy, who had lived at Durban’s King Shaka International Airport with his brother for more than five years, had been shot dead, allegedly by an on-duty police officer in the early hours of New Year's Eve, December 31 2018.

The shooting was confirmed by the police, who said the incident and the policeman were under investigation.

A witness to the alleged shooting, cab driver Teddy Uganarian, said he was one of many people who fed the two neutered males twice a day.

On the day, the cats had emerged from the bush and he had fed them. The shooting took place in front of him, he alleged.

Boy’s brother, Snowy, was taken to Nine Lives Cat Sanctuary in Waterfall “for his own safety”.

He is still living there, according to founder Andre Stokes.

Emergency workers who were called out to assist following reports that a baby was stuck in a drain in Newlands, north of Durban, on Thursday found a ...
News
2 years ago

A family that owns a private lion park is inconsolable over the deaths of four lions that were poisoned on Tuesday night.
News
2 years ago
Next Article