Ultimatum for data giants: reduce your prices or else 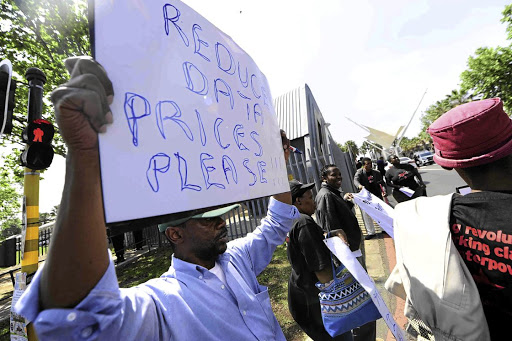 Right2Know held a demonstration at the Vodacom head office in Midrand yesterday over high data tariffs. The Competition Commission has heard their cries.
Image: Thulani Mbele

Cellphone companies will have to cut data prices by up to half by the end of next month or face prosecution by the Competition Commission.

All mobile phone operators may be compelled over the next three months to start offering free and daily data to prepaid customers "to ensure all citizens have data access on a continual basis".

LISTEN | What lower data cost will mean for SA

If the commission has its way, access to the websites of educational institutions and "public benefit organisations" will also be free.

But cellphone operators still insist they are not to blame for high data costs. They say this is a result of the government's failure to release more spectrum to service providers.

The announcement by the competition body yesterday will be seen as a victory for long-suffering customers who complain about the high costs of data in SA.

Their complaints are what caused the commission to launch an inquiry into data costs two years ago.

The findings, which were made public, confirm data prices in SA are excessively high and that the biggest cellphone providers, MTN and Vodacom, have failed to explain why.

The Competition Commission took the first and important step towards reducing data costs in the country yesterday.
Opinion
2 years ago

Currently, a pre-paid monthly 1 gigabyte of data costs around R150, which according to the commission, is high and discriminates against the poor. On a two-year contract, which is a market for the middle classes, the cost is lower.

Commissioner Thembinkosi Bonakele said Vodacom and MTN would have to reduce their prices by between 30% and 50%.

"Vodacom and MTN must immediately reduce prices by agreement with the commission and I have indicated before, we believe on the basis of evidence that there is scope for price reductions in the region of 30% to 50%," Bonakele said.

"A failure to reach this agreement within two months will then lead the commission to considering going ahead with prosecution for excessive pricing or other exclusionary abuse before the Tribunal."

The inquiry also found that MTN and Vodacom have monopolised the data industry.

"We find that price-based competition is inadequate. The challenger networks of Cell C and Telkom Mobile are unable to effectively constrain the two first-movers and that Vodacom has substantial market power, with MTN to a lesser degree," reads the report.

"There was a consensus in the submissions to the commission on this point, with the obvious exception of Vodacom and MTN themselves, who continued to maintain that the market was competitive."

The Competition Commission has recommended that network service providers lower their mobile data costs by between 30% and 50% within the next two ...
Business
2 years ago

The report also recommends that MTN and Vodacom must, within two months, agree on the same pricing for data below 500 megabytes.

It also recommends that all mobile providers, including Cell C and Telkom, must reach an agreement with the commission in the next three months to "offer all prepaid subscribers a lifeline package of daily free data to ensure all citizens have data access on a continual basis".

The operators must also stop charging data on content from public benefit organisations and educational institutions.

MTN spokesperson Jacqui O'Sullivan said the government had failed to release the spectrum that the mobile industry needs to reduce costs.

"To simply lay the blame for data costs at the foot of the operators is wrong. MTN in SA has had to compensate for the lack of spectrum by spending over R50bn in the last five years to build a world-class network for all South Africans, covering over 95% of the population with 4G coverage, without any 4G spectrum having been allocated," said O'Sullivan.

Vodacom spokesperson Byron Kennedy said: "Vodacom has reduced the effective price of data by circa 50% since March 2016. with regard to the Competition Commission report, we will engage with the commissioner and comment further in due course."

Cash-strapped SABC says it is planning to leverage online platforms to allow customers to access its content from any device.
News
2 years ago

A hard-hitting report by the Competition Commission has stopped short of accusing the private healthcare industry of exploiting unsuspecting ...
News
2 years ago
Next Article