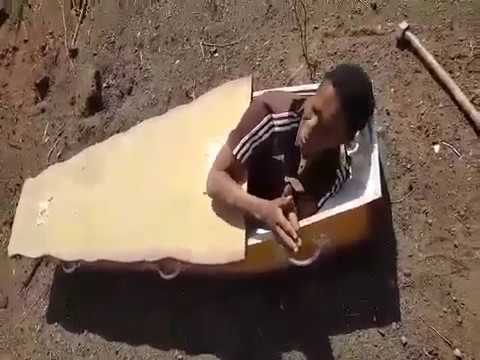 A man who was forced into a coffin and threatened with death by farm workers who claimed he stole copper cables is hurt after discovering that their conviction for attempted murder has been overturned.

The high court in Middelburg had in 2017 sentenced Willem Oosthuizen and Theo Jackson to 16 and 11 years behind bars, but they will now serve five years. They have already sat for two years so could be eligible for parole next year.

Victor Mlotshwa said on Tuesday that he had just heard the news.

The Supreme court of Appeal (SCA) overturned the convictions on Monday.

“I just received the outcome of the case now, as I was watching the news,” Mlotshwa said. “It is so painful and hurtful to me. I knew they were appealing but I didn’t expect this. I feel betrayed because I just don’t understand,” he said, his voice breaking as he fought back tears.

"I feel like there is another hand at play. For now, I need to go and sit down with my mother and tell her the news.  I don't know how she will take it because this means soon  these people will be back on the streets," he said.

The man who was forced into a coffin said he was shocked to hear that his attackers had been granted leave to appeal their sentence.
News
3 years ago

The two farm workers who filmed themselves forcing Victor Mlotshwa into a coffin will each spend more than a decade behind bars.Twenty-nine-year-old ...
News
4 years ago

Mlotshwa's ordeal made headlines in 2016 when a video of the coffin assault went viral on social media.

In the video, he could be heard crying and begging for his life as the pair threatened to set alight the coffin he was forced into.

Jackson and Oosthuizen, who started serving their sentences in 2017, had pleaded not guilty to the charges.

The SCA has set aside their attempted murder convictions and an assault conviction for Delton Sithole, who said he was also assaulted by the pair on the same day they forced Mlotshwa into the coffin.

On the attempted murder conviction, the SCA found the "trial court's approach to the evidence was arbitrary. For instance, it is accepted there was insufficient evidence before it regarding the instrument referred to as a firearm, but at the same time accepted the evidence of the complainants where there was a lack of sufficiency of evidence."

On Sithole’s assault, the court ruled: “Given the many probabilities in the complainants' account, coupled with contradictions in their own evidence and the objective facts, the trial court erred in accepting evidence of Sithole as proof of the commission of the assault against him.”

Coffin assault accused sentenced to more than 10 years each

Two men have been sentenced to prison terms of more than 10 years each for abducting Victor Mlotshwa and forcing him into a coffin. Theo Martins ...
News
4 years ago

On Monday‚ one of the two men who placed Victor Mlotshwa in a coffin‚ threatening to burn him alive‚ conceded that he was remorseful only because he ...
News
4 years ago

Following a Constitutional Court ruling in October declaring sections of the Intimidation Act of 1982 as unconstitutional and invalid,  Oosthuizen and Jackson's intimidation convictions were dissolved.

The high court had initially handed them a five-year sentence for kidnapping. but the SCA reduced this to one year.

The pair are now only serving time for assault with intent to do grievous bodily harm on Mlotshwa and his kidnapping while Jackson faces an additional charge of defeating the ends of justice after he confessed to burning the coffin that had been used in the attack.

For the assault, they each get five years in jail, with another year for kidnapping. All the sentences will run concurrently, meaning they will serve just five years behind bars. With the sentence being antedated to August 2017, the pair have essentially served more than two years. Once they have served two thirds of their sentence, they may be eligible for parole.

The SCA took note of the lack of remorse from the pair.

The National  Prosecuting Authority (NPA) noted certain aspects of the SCA judgement, including the reduction of the sentence for kidnapping.

Spokesperson Monica Nyuswa said:  “The SCA has given them a sentence which could have easily been passed by the district court.”

She said the NPA would study the judgment further.