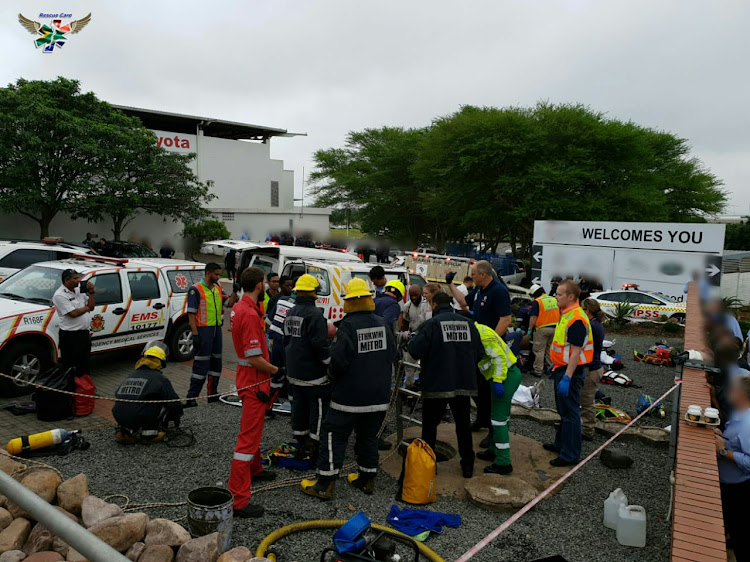 Three men have been rescued after collapsing while working underground in Umhlanga. Two suffered critical injuries while a third was in a serious condition.
Image: Rescue Care

Two men are in a critical condition after collapsing while cleaning an underground container in Umhlanga.

Emergency services were called to the scene of a manhole near Gateway mall on Thursday where three men had collapsed underground.

“Three men had been cleaning some sort of underground container and were overpowered by the fumes and collapsed,” said Rescue Care paramedics spokesperson Garrith Jamieson.

The men were rescued after efforts from various emergency services which included SAPS search and rescue and the eThekwini fire department.

“Two have sustained critical injuries and have been placed on a manual ventilator by advanced life support paramedics on scene. The third has sustained serious injuries,” said Jamieson.

He said Rescue Care paramedic Tebogo Dladla was one of the first on scene and went down with a breathing apparatus to attend to the three men.

One toddler killed, another critical, in apparent ambush in KwaZulu-Natal

A two-year-old girl has been killed and a three-year-old boy left in a critical condition after a shooting in Cato Ridge, outside Pietermaritzburg, ...
News
2 years ago

Health minister Dr Zweli Mkhize has praised KwaZulu-Natal for being the only province to achieve a critical United Nations target in the fight ...
News
2 years ago
Next Article