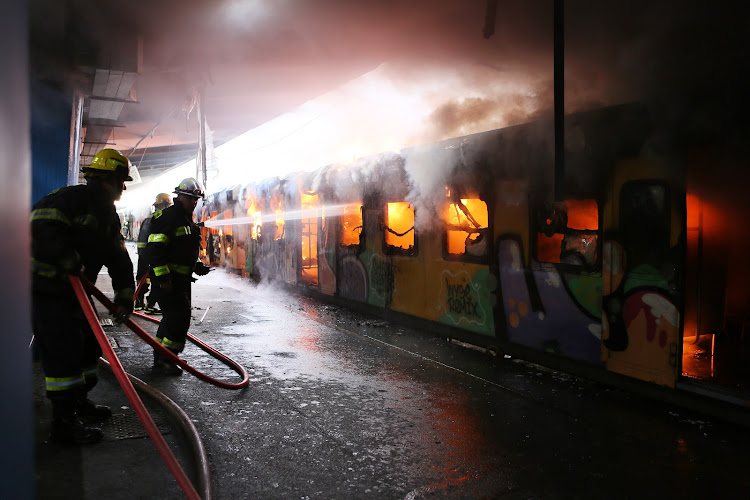 Cape Town mayor Dan Plato says that in the past three years more than 140 train carriages, which make up over 40 train sets, had been burnt yet no one had been prosecuted.
Image: Ruvan Boshoff

Western Cape transport MEC Bonginkosi Madikizela criticised the national government on Thursday for being “territorial” with the investigation into arson attacks which destroyed 18 train carriages at Cape Town station.

Speaking shortly after a patchwork commuter rail service was restored, and with 10 platforms out of commission, Madikizela said: “The biggest problem here is that some of us are territorial. We want to flex our muscles and say this is our baby.

“This is a problem for all of us. We need to work together. Respect each other's roles and responsibilities so that we can solve this,” Madikizela told reporters in the station concourse.

The MEC said it was his third visit to Cape Town station after arson attacks since his appointment in May.

By October last year, Cape Town's Metrorail train stock was reduced by 50% after 46 train sets had been burnt since the fires started in 2015.

I took a train for the first time in over 10 years this week and boy oh boy, it was a total nightmare.
News
2 years ago

A Sunday Times investigation earlier this year reported that the fires were an inside job, the result of labour disputes and a fight between the Passenger Rail Agency of South Africa (Prasa) and two unions representing security staff.

Thursday's fires, which started about 2am, are the biggest arson attack on a single station.

In April 12 carriages were torched, resulting in losses of R33m and the suspension of Metrorail regional security chief Ernest Hendricks and two other officials.

While Madikizela was addressing reporters, Prasa technicians assessed the damage on the four platforms which experienced the worst damage.

The smell of burnt plastic, steel and electronics hung over the platforms on a windless, sunny day. Plastic hung from casings which had held flat-screen info devices a few hours earlier.

Overhead cables were damaged and drooped across the tracks. Dozens of cleaners were cleaning soot off the station walls.

One of the burnt trains from this morning's #MetrorailFire in Cape Town is about to depart to Prasa depot to undergo a damage assessment. @TimesLIVE pic.twitter.com/uc81LvMGYl

Metrorail spokesperson Riana Scott said two full train sets were destroyed by the fire. She said it was believed an accelerant was used to start the fires.

“Law enforcement and investigative teams are still on site – early indications are that an accelerant was used. The burnt trains will be moved to the depot for assessment by Prasa’s loss adjusters later today to determine the extent of the damage,” she said. “Thereafter technical and recovery teams will move in to assess the integrity of underlying and overhead infrastructure.

“The full extent and cost estimate of the damage will only be known once Prasa’s loss adjusters have had opportunity to assess the damage.”

Madikizela commented on the fact that the attack happened shortly before the rollout of Prasa's new trains.

“We've lost 38% of the passengers over the past few years. And just when we're expecting new trains to come on board this thing happens,” he said.

“It is very clear that there is a syndicate here and people know that there are new trains coming and immediately something like this happens.

“Surely, if we have effective law enforcement agencies and intelligence, we could cut the umbilical cord of this thing.”

Cape Town mayor Dan Plato also criticised the fact that no one had been held accountable for the “economic sabotage” of train fires.

“Today I will be writing to President Cyril Ramaphosa requesting that the Hawks be tasked with establishing a special unit to investigate the burning of trains in Cape Town,” he said in a statement.

“Over the past three years, more than 140 train carriages, which make up over 40 train sets, have been burnt in several separate incidents, yet not a single person has been prosecuted.

“One person deemed to be mentally unfit was arrested some months ago, but other than that the SAPS detective services have failed the people of this city.

“Our rail service is a shadow of its former self and, as hundreds of thousands of former rail commuters abandon the trains, we see our roads clog up with more cars, buses and taxis.

“Prasa, Metrorail and SAPS need to get their house in order. We cannot continue to allow their failures to impact the residents of this city."