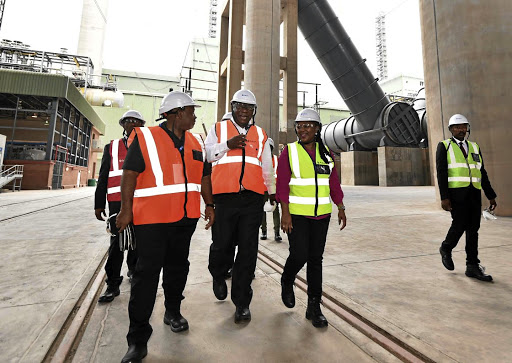 Eskom chairperson Jabu Mabuza, President Cyril Ramaphosa and project manager Zandi Shange on a tour of Medupi power station in Lephalale, Limpopo. Ramaphosa signed a certificate for the completion of the second last unit and the station will be fully functional from March. / Jairus Mmutle/GCIS

"It was not easy from day one as we had lots of challenges and they had to be managed otherwise failure was going to be a disgrace for the future of the country."

These were the words of project manager Zandi Shange, 44, who was in charge of Eskom's multibillion rand Medupi power station in Lephalale, Limpopo.

Shange, who was appointed in 2009, was on Tuesday bombarded by congratulatory messages from President Cyril Ramaphosa for her sterling job.

Shange, from Empangeni in KwaZulu-Natal, admitted that it was not an easy job to manage such a big project.

"We had challenges such as labour and redesigning of the project hence we took time to complete it.

"I became the project manager in 2009 and Medupi was my first big project. I worked for Komati power station [in Middelburg, Mpumalanga] before joining Medupi," Shange said.

President Cyril Ramaphosa says Eskom will not be sold or privatised. Ramaphosa said privatising Eskom would be similar to selling it.
News
2 years ago

She attributed the success of the project to all her colleagues and other stakeholders involved.

Signing certificate for the officially completion of the second last unit, Ramaphosa said he was proud of Shange.

"You and your team did a great job for building the fourth largest power station in the world.

"It is quite a milestone and it will be fully functional in March 2020," Ramaphosa said during his visit.

Shange, who holds B Tech in project management, said she was honoured to be recognised by the president.

"The feeling is inexplicable. I did not expect the president to mention my name as he recognised my work.

"I'm happy for the re-ignition and I would like to urge other women out there not to listen to negativity and believe in themselves," she said.

Ramaphosa and some of his cabinet ministers took a tour inside the power station.

This certificate is to allow Eskom to commercialise and operate another completed unit.

Though the project took time, it will be fully running next year March," he said.

"On the energy site our country is the biggest power producer in the continent.

"We have the biggest challenge which is debt. In building these stations we had to borrow money.

Eskom owes R400bn in debt. Our economy is not working at the rate we want," Ramaphosa said.

President Cyril Ramaphosa has had to retrench over 20 workers in one of his farms due to foot-and-mouth disease and bad trading conditions.
News
2 years ago
Next Article