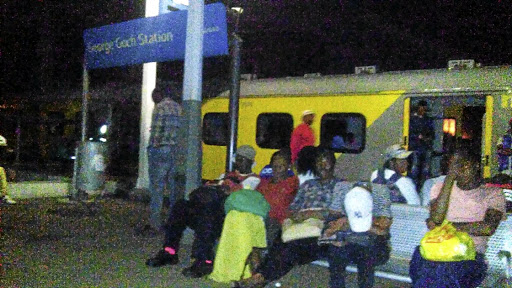 I took a train for the first time in over 10 years this week and boy oh boy, it was a total nightmare.

At about 5pm on Monday, I boarded the train at Park Station in Johannesburg.

The Metrorail train was headed to Pretoria via Germiston; the latter was my destination.

Just after purchasing the ticket, I heard a man outside the ticket office indicating to another commuter that he was also going to Germiston.

I then followed him. For the purposes of this piece, I will identify him as Mike. He was friendly enough to help me find my way around the rush of people at the station.

After settling inside the train, I asked him why it had not departed after five minutes. Mike then realised that I was really clueless about how trains actually function.

"My friend, you seem to be in a hurry. This is not your space. Here you have to keep calm and be ready for anything to happen. Please keep calm because you can actually arrive at your place at 9pm.

"So, please don't increase your blood pressure. Anything can happen. You will sleep, stand and sit, but not go anywhere," Mike said with a smile.

I took his statement as a joke, as in my last train ride in 2008, but it became a reality.

About 15 minutes later, the train departed and I was relieved.

But just 300 metres before it could arrive at George Goch Station, the train stopped. After half an hour, I asked Mike what was happening.

He replied: "I told you to calm down, it is clear you were not listening."

After an hour, I noticed that no train from Park Station had passed ours.

As time went on, it became dark. Mike and I also joined the exodus towards the station. When we arrived there, we found about 2,000 people waiting. They had boarded the train to Tembisa and it suddenly stopped.

There was no communication regarding what was happening. Some commuters approached the train driver to get some answers.

The bald man, who one of the commuters referred to as "Wrong Turn", stood calmly outside the train and informed us that there was a power cut.

The news ignited anger among the already agitated commuters. Some suggested the driver be assaulted, while others even threw the idea of setting the train alight into the fray. The latter was rejected in majority.

"We used to have 12 trains along this line, but now there is just nine. If you set alight this one, things will get worse," Wrong Turn explained.

Just before 8pm, I called one official at Passenger Rail Agency of South Africa (Prasa) who confirmed that there was a blackout.

I asked him why no alternative transport was provided, he simply said such a service was not longer available.

According to the 2020/2022 Prasa medium-term expenditure framework (MTEF) corporate plan released in March, Metrorail is recording fewer than 700,000 passenger trips per day when it is supposed to be capable of carrying 2,5 to 3 million passengers.

The estimated number of passenger trips for 2018/2019 is 213 million, less than one third of what it was a decade ago.

The wait continued and the saddest part was that there were not so many taxis passing by, which commuters could take. The few that came were packed quickly. Most commuters complained that they had no money for taxi fares. A lucky few were able to call friends and family to fetch them in cars.

For the rest of us, we sat on the platform. Just as frustration was growing, the lights went on and our train left at about 9.30pm.

For me, it was a one of the worst experiences in public transport, but for the thousands of South Africans, it is an every day life.

Whatever the circumstances are at Prasa, this cannot continue. It goes against all the values of our democracy.