Man convicted for killing his own father 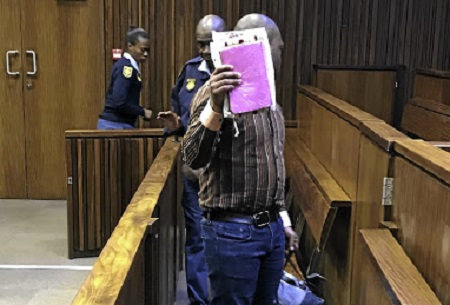 Tebogo Saohatse, who is accused of killing his father Ben Saohatse, makes his way to the cells from the dock in the South Gauteng High Court.
Image: TANKISO MAKHETHA

There is no rule that states that a body is required for a court to pass verdict in a murder case.

These were the words of acting judge Prince Manyathi who convicted Tebogo Saohatse, 33, for killing his father Ben Saohatse more than two years ago.

Although the 70-year-old's body was never found, Manyathi in a scathing judgment yesterday, said this was inconsequential.

"The presence of a body plays no role in the determination of death. Postmortem results do not show subjective intention of the accused and there is no rule that states that a body is required for a court to pass verdict in a murder case, " Manyathi said.

Tebogo was found guilty in the South Gauteng High Court for murdering his father at their Brackendowns home, south of Johannesburg in February 2017 and for defeating the ends of justice.

He admitted that he hit his father with a metal garden rake on the side of the head.

Tebogo claimed that he had an argument with his father, who then attacked him with a knife. He also claimed that he tried to take his injured father to hospital after the fight, but that the pensioner jumped off a moving bakkie and was never seen since then.

His mother, Caroline Saohatse, was also accused of murder, but was only found guilty of defeating the ends of justice after she was found cleaning her husband's blood stains at their home on the night of the murder.

Manyathi pointed out inconsistencies in the pair's testimonies. He said if the court held the principle of "no body no evidence" then it would find itself carrying out a great injustice.

"It will mean someone can commit a murder and get away with it if they completely destroy the body, " Manyathi said.

He disputed Tebogo's version of events on the night his father was attacked. "The court found that you murdered the deceased in the kitchen of his house. He was butchered and killed while the door was closed because there were blood splatters behind the door."

Manyathi said Tebogo gave the court three conflicting versions about what happened when he was driving his injured father to the hospital.

"The first version he said that his father jumped out of the car - which is impossible if you are looking at health complications he had [he was due for a hip replacement surgery] and he was bleeding profusely," Manyathi said.

A man has described how he assaulted his 70-year-old father with a rake before dragging him onto his van after they had an argument over the women ...
News
2 years ago

He pointed out pictures that were handed in as evidence which showed blood spatters in the kitchen where the attack occurred.

"When looking at photos, while he was being hit, he was trying to run away.

"It's clear, one can see a stain of blood that shows that they were either crawling or was pushed against the wall. There's blood on the pavement. Its either the person was placed there, or they were crawling there and left the stain.

"There was also blood on the window and it's curious how it got there if he was being loaded into the bakkie," he said.

The matter was postponed until February 7 for sentencing.

Masabata Saohatse, the deceased's sister, told Sowetan she was disappointed that Caroline was found not guilty of murder as well.

"It's a pity that the clothes she was wearing on the night, which had blood as well, were not taken in by the forensics. We still don't know where Ben's body is and they refuse to tell us. It's as if he vanished without a trace," she said.

The director of public prosecutions in Pretoria has successfully applied for leave to appeal against the sentence of a caution and discharge imposed ...
News
2 years ago

A man and his son will spend two decades behind bars after being found guilty of murdering a goat farmer in the North West almost four years ago.
News
2 years ago

A 43-year-old taxi boss was shot dead in Fairview in Port Elizabeth on Tuesday morning.
News
2 years ago
Next Article