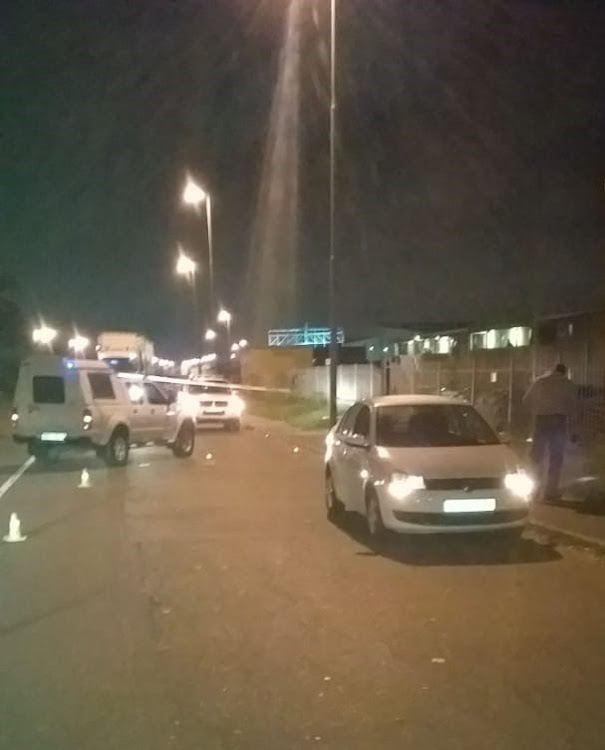 Cops on the scene of a shooting on Musa Dladla Drive in Wentworth, south of Durban, on Tuesday night.
Image: Supplied

Three people were shot and injured during a drive-by shooting in Wentworth, south of Durban, on Tuesday.

The shooting follows a spate of gang and drug related violence that has plagued the community.

The police said the victims, aged between 19 and 49, came under attack about 7pm.

"Last night at 7pm three victims were in their flat in Wentworth when four unknown men opened fire from the road through the windows," said the police in a statement.

"The victims sustained injuries on the back and shoulder and were taken to hospital for medical attention.

"Three counts of attempted murder were opened at Wentworth police station for investigation."

KwaZulu-Natal police commissioner Lt-Gen Khombinkosi Jula visited the area on Wednesday in the wake of the shooting.

He said the victims - two women and a man - were in their flat at the time of the incident.

"We have become aware that in this area of Wentworth - and it's not the only area, there are other areas that include Sydenham, Chatsworth and Phoenix - there have been some acts of gangsterism that have been happening here and could have been happening for quite some time," said Jula.

He said the problem required "all hands on deck", adding that the community played a crucial role in how police addressed the issue.

Jula said the impact of drugs on communities led to gang violence and was something that police officers in the province would not tolerate.

He claimed that the police would be adopting a different approach to combat such incidents - but would not reveal more as it was considered crime intelligence.

Nine teenage boys have been arrested after a 16-year-old was killed in an alleged fight that broke out between hostel members in Welkom in the Free ...
News
2 years ago
Next Article