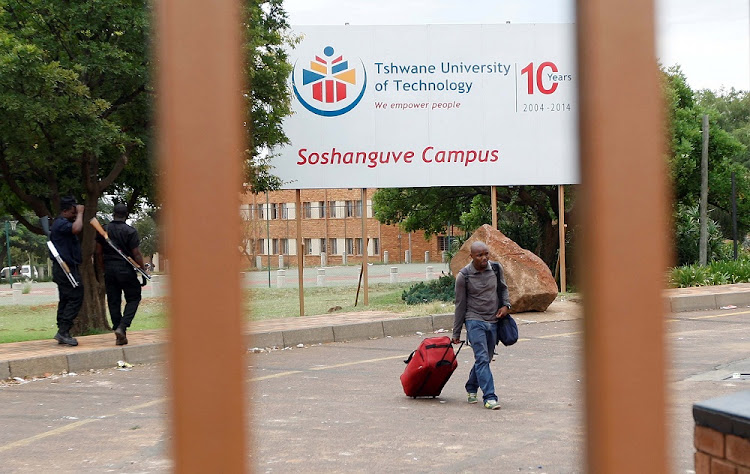 A Tshwane University of Technology (TUT) student leaves the university's premises in this file picture. The university is accused of making an illegal appointment.
Image: VATHISWA RUSELO SOWETAN/SUNDAY WORLD

As the Tshwane university of technology is due to appear before parliament's portfolio committee on higher education, science and technology, more allegations of corruption have surfaced.

Last week the committee summoned the TUT management to appear before it amid several complaints of maladmistration, corruption and nepotism.

These complaints were received  from various stakeholders from TUT.

The committee resolved to conduct a preliminary inquiry into these allegations by engaging the university and the stakeholders.

This is after TUT management failed to appear before the committee about four weeks ago for preliminary enquiry.
News
2 years ago

Lekead documents which Sowetan has seen, reveal that Pupuru Motebejane who is currently Nehawu's regional secretary at Solly Ledwaba is alleged to have been appointed in a senior position without proper qualifications.

A senior official who works at the university who did not want to be named for fear of reprisal said: "The gentleman was employed through the influence of the union. He is a union staff member paid for by the university. He has no job profile and he is employed on a permanent basis but doing nothing."

Nehawu's national spokesperson Khaya Xaba said they were not aware of the allegations.

"For a very long time Nehawu has been at the forefront of highlighting the scourge of corruption and maladministration that has engulfed the university," he said.

He said Nehawu has always prided themselves as a union that fights all forms of corruption wherever it rears its ugly head.

"We will do everything in our power and use all the resources available at our disposal to ensure that corruption is uprooted at TUT and all other universities including TVET colleges. Corruption is a cancer that prohibits quality service delivery and proper running of our public institutions and society as a whole must join hands in exposing it," he said.

The family of a Tshwane student who was found drugged and disorientated two days after being allegedly abducted said they went through hell while ...
News
2 years ago
Next Article