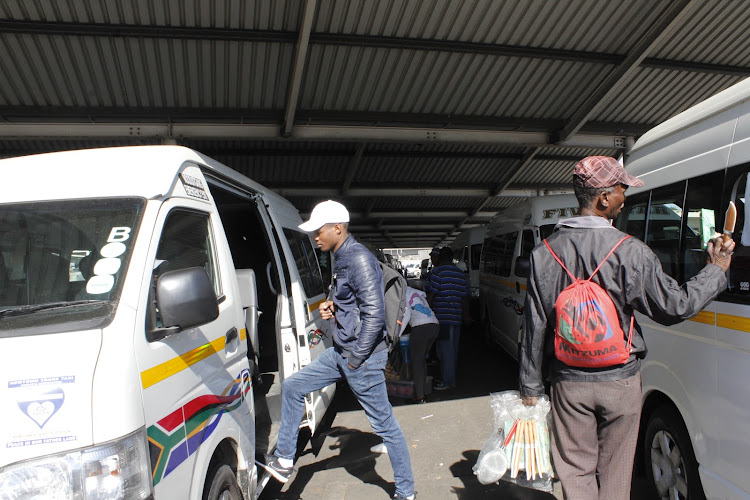 Members of the Codeta taxi association met police and people in the e-hailing industry on November 11 to notify them that they would only be "allowed" to drop off passengers in Khayelitsha for three more days and that no more pickups would be permitted.

According to David Drummond, chairperson of the Section 66 Association, which represents taxi and e-hailing interests in the Western Cape, competition has increased in the city centre and drivers are now going to outlying areas.

He said there were thousands of drivers operating without permits. He said e-hailing app operators allow drivers to register even if they do not have permits from the local authority. As a result, minibus taxi operators are taking matters into their own hands.

“They said no one else is doing anything about it, so they’re becoming the police in these areas,” said Drummond.

He said the problem was that drivers with permits were “being put in the same category as the illegals”.

“If we relent to Codeta in Khayelitsha, if we allow them to deny us access, then tomorrow it’s going to be Cata [the Cape Amalgamated Taxi Association] in Delft, and then eventually taxis will be banned by these organisations from these areas, which will do more damage to the industry,” said Drummond.

Jandré Bakker, communication head for the provincial transport department, said: “E-hailing services fall within the broad definition of a metered taxi service and must comply with these requirements. According to our records, the city of Cape Town has supported some 1,642 applications for e-hailing metered taxi operating licences.”

To date about 1,050 of these operating licences have been issued, he said.

Bakker said all e-hailing vehicles must be marked with the letter "e", and the type of service and operating licence number must be displayed on the vehicle.

He said the proliferation of illegal e-hailing operations has been brought to the attention of all law enforcement agencies.

“We have received complaints about taxi associations ‘illegally impounding’ e-hailing vehicles … The impoundment of vehicles is the sole purview of law enforcement agencies … We will not hesitate to take action against any minibus-taxi association or member.”

A "Ghost Squad" police officer shot and wounded a taxi driver who tried to ram into his vehicle on Friday.
News
2 years ago

Bakker said they had received reports that “certain e-hailing operators are now providing commuter/minibus-taxi type services from residential areas to shopping areas and public transport interchanges”, but the licence conditions do not allow them to operate at municipal ranks.

“An operating licence may be withdrawn if the holder does not comply with the terms and conditions.”

An Uber spokesperson told GroundUp: “Drivers using the Uber app have already completed the steps to apply for their operating licences”. These steps include having a professional drivers’ permit, a roadworthy certificate, a background screening and a driving evaluation.

But, said the spokesperson, the city’s issuing of operating licences is “a non-functioning system, and the problem is worsening as the backlog of applications steadily grows”.

“Uber has repeatedly attempted to engage with the city to resolve the numerous issues and extremely lengthy delays. Unfortunately these concerted efforts by Uber have repeatedly failed - always as a direct result of the city’s inability, or unwillingness, to work towards finding a workable solution.

“This lack of co-operation by the city, combined with the fact that Uber continues to pay vehicle release fees, casts doubt on the city’s motivation for failing to put a fast and efficient permit issuing system in place and address the current backlogs.”