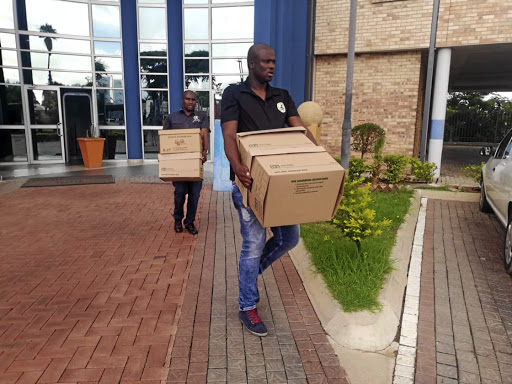 More than 20 boxes containing evidence were seized by investigators at the Lepelle Northern Water offices in Polokwane, Limpopo, yesterday.

The Special Investigation Unit (SIU) raided the entity tasked with water provision to more than 50 villages in Giyani after R2bn project failed. The SIU is investigating maladministration and corruption relating to Mopani Water Intervention Project also known as Giyani project.

The project was meant to supply 55 villages in and around Giyani with water, but was incomplete after the water department failed to make payments to contractors.

Yesterday, SIU investigators spent eight hours at the utility offices searching for evidence to help in its probe.

"We filled over 20 boxes with documents and I hope we got what we wanted. The reason we went to court is because Lepelle was refusing to give information relating to the project," he said.

Sowetan has learnt that offices raided included the human resource, finance and that of CEO Phineas Legodi.

The state of service delivery in Nala municipality in Free State is totally pathetic, to say the least.
Opinion
2 years ago

During the raid, Legodi was not in the office after he called in sick. He confirmed he was hospitalised, but refused to comment further on the raid.

Lepelle Nkumpi Water board chairperson Kennedy Tshivhase was suspended for allegedly receiving bribes from contractors doing business with the entity.

Among the allegations were that Tshivhase had received a luxury car from Thulani Majola, the owner of LTE Consulting Engineers, which was awarded a R100m emergency tender to fix the water problems in Giyani. The contract has since ballooned to R3bn in costs.

The portfolio committee on human settlements, water and sanitation yesterday welcomed the SIU raid, saying the investigation into alleged wrongdoing at the entity is a step towards finalisation.

Chairperson Machwene Semenya said the people of Giyani are without water despite massive investments in the project.

"All allegations of corruption must be investigated and concluded so that if there is any unlawful activity, adequate consequences are meted out. It is unacceptable that the project has not been concluded since its launch in 2014, which robs residents of much-needed water," said Semenya.

Semenya added the death of a boy in a trench dug by a contractor earlier this year was a testament to the gross disregard for human life that the delay has caused.

Lepelle Northern Water spokesperson Simon Mpamonyane said they had been cooperating with the investigation.

"We gave the SIU information before and they had to come back for additional information. At the time they obtained the court order, we were about to furnish them with another information," he said.

He said the department of water and sanitation has allocated R500m budget which is needed to complete the project.

Two Limpopo businessmen  are expected to appear in the Polokwane magistrate's court on Friday to face charges of corruption.
News
2 years ago

Thirteen non-profit organisations linked to the Life Esidimeni scandal are to appear before a Special Investigating Unit tribunal.
News
2 years ago

Former SABC boss Hlaudi Motsoeneng has gone to court to challenge a five-year-old report by the public protector in his latest bid to force the SABC ...
News
2 years ago
Next Article