Thousands gather to pray for peace and prosperity 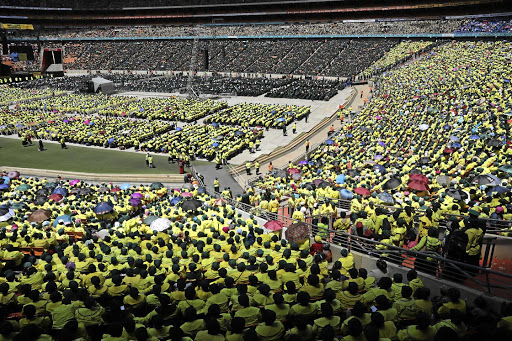 The National Day of Prayer held at FNB Stadium yesterday was organised by the Motsepe Foundation.
Image: ANTONIO MUCHAVE

Violence against women and children took centre stage as thousands of people from different denominations gathered at FNB Stadium yesterday to pray for the country.

The country's biggest stadium was packed to capacity, forcing organisers to close some of the gates to prevent overcrowding. An overflow area at the stadium precinct was also full as people from different faiths prayed for peace and prosperity in SA.

The 2019 National Day of Prayer was organised by the Motsepe Foundation to unite people towards seeking divine intervention to the country's problems.

Lekganyane detailed how Biblical leaders like Moses in the times of Egypt and Jesus served people by putting the interest of their followers first.

Quoting from John 13, where Jesus washed his disciples' feet, Lekganyane said the problems that SA and the world faced needed such attitude. "Jesus' basic motivation was love for his followers. Jesus voluntarily became a servant to his followers. He did not come primarily to wash people's feet but was ready to do so when needed. [Through this] Jesus wanted to set an example to his followers. Do our current leaders have this kind of qualities?

"Leaders such as Jesus and Moses are in short supply in South Africa and globally if the state of the world and our country is anything to go by," he remarked. 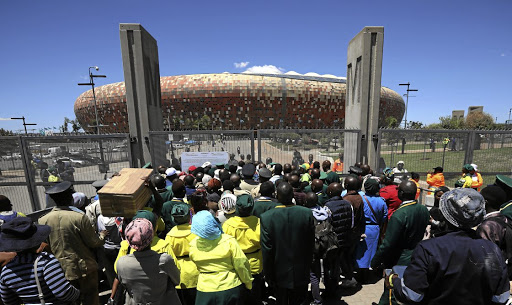 "A nation that is distant from God cannot prosper .We are here to pray for the end of the violence we have seen in this country," Shembe said.

He said SA needed to ask for forgiveness from God in order for Him to remove the evil that is troubling the nation. This evil, he added, was the killing of women and children which has troubled the country for years. "Some of the violence cannot be comprehended. You even ask yourself, where do the people committing such crimes come from?

"We should pray that none among us here in this stadium should be found to have done such things I'm talking about tomorrow," Shembe said..

Archbishop Buti Tlhagale of the Roman Catholic Church said the recent South African Airways strike was evidence that people could fight for justice without using violence.

"There is no reason for communities fighting for basic services to use violence and damage public infrastructure in order for them to be heard," Tlhagale said.

Tlhagale urged South Africans to return to God and prayer. Gospel artists, including Benjamin Dube, Joyous Celebration, Rebecca Malope and Winnie Mashaba, performed. Today, some of the churches will make presentations on what they aim to do with the R100m the Motsepe Foundation has set aside for churches to create employment in their communities.

Gender-based violence (GBV) is often misconstrued as a scourge that targets poverty-stricken women.
News
2 years ago
Next Article