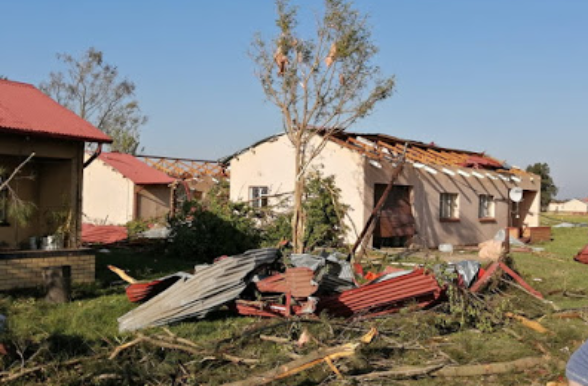 Parts of the Waterval correctional services facility were badly damaged in the tornado that hit Utrecht, KZN, on Friday night.
Image: @ DefacedPicasso via Twitter

Devastated residents in the Utrecht area in KwaZulu-Natal were picking up the pieces on Saturday morning after a tornado ripped through the area on Friday night.

Almost 50 families have been left homeless after their homes at the Waterfall correctional service staff facility were destroyed.

“It's devastating to see dead animals and uprooted trees as well as destroyed homes,” he told TimesLIVE.

He said the community was in desperate need of water and food. A local bottling company, Thirsty, had donated water on Saturday morning.

“The affected residents will still need more. We urge locals to come forward with food items too,” Pieters said.

Chairman of the Newcastle Growth Coalition Johan Pieters says at least 40 families have lost their homes in the Waterfall Correctional Service staff center when a tornado hit Utrecht on Friday night. pic.twitter.com/dZxYfylNKy

The SA Weather Service confirmed that a tornado hit the area on Friday evening.

“At 7.30pm, a severe thunderstorm warning was issued for the Amajuba and uMzinyathi districts in KwaZulu-Natal with damaging winds and hail, which was then forecast to move to Zululand.

“A severe storm developed between Newcastle and Dundee in KwaZulu-Natal on Friday evening and moved eastwards. This storm then changed its path northeast in the direction of Utrecht,” the weather authority said in a statement.

“This storm continued to move through the Utrecht area in a northerly to north-easterly direction but weakened about 20km north of Utrecht.

“The same storm then redeveloped and resulted in large amounts of small hail and some large hail in parts of Piet Retief at 11.30pm and continued moving in a north-easterly direction to the north of Piet Retief until 12.30am, which resulted in damage to property and difficult driving conditions,” SA weather said.

More than a week ago, a tornado ripped through eMpolweni, outside New Hanover, leaving a trail of destruction and killing two people.