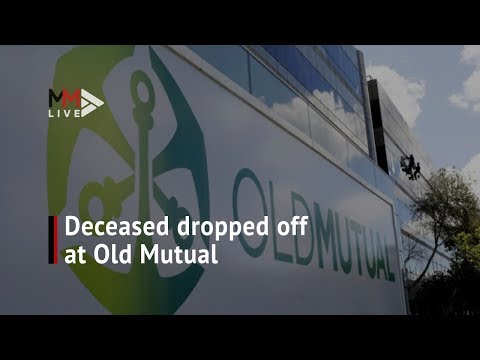 A KwaZulu-Natal family was forced to go against funeral rituals by dropping of their dead relative’s body at the Old Mutual office in order to force the insurer to payout their funeral policy claim.

It was on Friday last week when the family of the deceased visited an Old Mutual branch in Stanger, KZN, to enquire about a claim they had made on Monday, the day their relative died.

Upon arrival at the branch, the insurer said that they were still busy with the claim which they said had been “flagged” and was sent for further assessment. This, however, did not sit well with the family who was already busy with funeral arrangements as they were told the same thing the day before.

SowetanLIVE understands that two sisters, whose relative had died, called the undertaker to bring the corpse to the Old Mutual branch as they believed this would force Old Mutual to act quickly on their claim.

Not long after the corpse was dropped off inside the branch offices, Old Mutual processed and paid the claim.

In a video that has emerged on social media, the two sisters are then seen carrying the body which was placed in a big blue bag out of the Old Mutual offices back into the undertaker’s vehicle after the claim was paid.

[EXPOSE OLD MUTUAL] Family bring their dead family member after @OldMutualSA refused to pay their policy benefit. Old Mutual’s arrogance is stinking now. What a shame! May the soul of the poor person Rest In Peace. Plz Retweet. pic.twitter.com/Gk2QFQWkoM

“Old Mutual can confirm that the death claim has been paid as it was valid.  It is not Old Mutual policy to decline or delay claims without providing valid reasons,” said Old Mutual in a media statement.

“Due to the sensitive nature of this matter, Old Mutual will continue engaging directly with the family concerned.”

The insurer confirmed that the claim had to go for further assessment, but could not specify what it was initially flagged for.

“While we make every attempt to settle claims as speedily as possible, this specific claim had to undergo further assessments, hence the delay.

“We take note of this incident and would like to assure our customers that claims are assessed on an individual basis and the incident at this branch whilst isolated is regrettable,” said Old Mutual.

The family had not responded by the time of publishing.

Following the publishing of the video, several people started calling out Old Mutual and relating their personal experiences with the insurer.

@VisionNative said: “@OldMutualSA never pay black people’s claims. I have been screaming at the top of my lungs for the past weeks of a policy they refuse to pay. This is a 33-year-old policy”.

@Leighten_M said: “I remember claiming for my late father’s policy after 10 of his passing with @OldMutualSA they never gave me any challenges. They paid the proceeds without taking me from A to Z. I will forever be grateful for the services they rendered to me”.

@ShadrackMakhado said: “I want to cancel mine, they are useless. The moment I get home I will cancel it, I’m pissed off”.

@Phoskifire said: “They told my mom after years of paying funeral policy for her parents that the policy was old. And it had matured… they only gave her R2,000 from R15,000, they must be exposed.”

@HBMZulu said: “I am traumatised by this. Must have taken a lot for this family to do this with their dead”.

@ms_tourist said: Wait a minute… what did I just watch? They are just taking Peter Moyo to court and failing their clients? This is despicable Old Mutual! You need to hang your head in shame”.