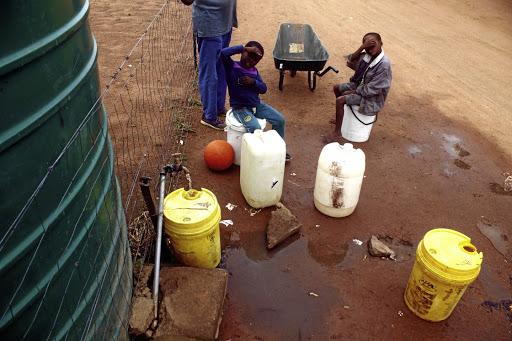 Children in Hammanskraal carry the burden of fetching water with wheelbarrows to help their familes.
Image: Kabelo Mokoena

Elderly and unemployed people are the hardest hit by the Hammanskraal water crisis as water tankers only deliver once a week.

Some residents in the greater Hammanskraal area, north of Pretoria, claim to have been without water for up to two weeks.

"For some this is nothing but for someone who is unemployed and is not even sure of what they will eat at night they can't afford to pay for water," he said.

"The water tanks only deliver once or twice a week. We are forced to buy water from people who own boreholes."

Another resident, Wilson Ramalekane, 37, said in some areas there was water coming from taps, in trickles though.

"That is the water we use for flushing but to fill a bath tub takes about three hours. Even though the municipality has sent water trucks they don't reach other places and we have discovered that there are truck drivers who are selling water to desperate communities. Something has to be done before people start dying for water," Ramalekane said.

The SA Human Rights Commission says it's yet to receive a plan of action to deal with the water crisis in Hammanskraal from the City of Tshwane.
News
2 years ago

#NotInMyName general secretary Themba Masango said this was not a permanent solution for the water crisis.

"A permanent solution can only come from Tshwane municipality. We encourage them to do so as soon as possible," Masango said.

"The municipality has committed about 150 tankers in Hammanskraal and so far the situation has improved drastically," Tau said.

"The only complaint we have received is from people who say they leave very early to go to work and come home very late. We have pushed the tankers to work until late. We are also pumping 17 mega litres of water every day and the tank water is only used for consumption."