Dam levels for Cape Town decreased by 0.5% over the past week, while water consumption remained above the 650-million litres per day consumption target.

Water use has remained stable at around 675-million litres per day for the past two weeks. Dam levels for the city stood at 83.7% on Monday.

In a press release on Monday, the City of Cape Town said surface water supply is "markedly higher" ahead of the 2019/20 summer season than it has been in recent years, but added that winter rainfall in 2019 was below average for the fifth year in a row. 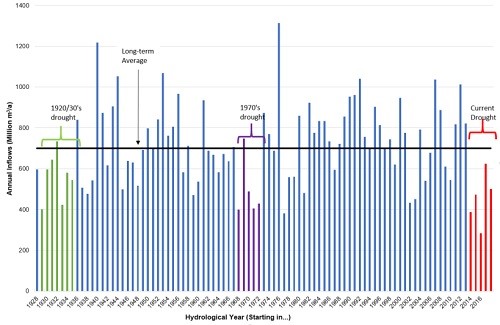 A graph showing the annual water inflows into dams since 1928.
Image: City of Cape Town

"We are aware that residents are anxious to know whether water restrictions will remain in place, and would like to remind the public that this must still be decided in consultation with the national department of water and sanitation (DWS) and all users of the Western Cape water supply system, including agricultural customers and other municipalities," said Xanthea Limberg, mayoral committee member for water and waste.

"DWS have scheduled a meeting at the end of November, in which their modelling for the region’s next hydrological year will be presented for consideration and discussion by all users of the system.

"The city does not wish to preempt the outcome of this meeting, and as such will advise on the way forward once necessary consultations have taken place," she added.

The Western Cape, Eastern Cape and Northern Cape have in recent years experienced the worst drought in recorded history. A "Day Zero" for Cape Town, where taps would effectively run dry, was avoided at the start of 2018 thanks to water restrictions and a drastic decrease in water use, from over one billion litres a day to below 500-million.

It's been seven days since residents of Klipfontein View in Midrand saw any drops of water coming out of their taps. Residents said they last had ...
News
2 years ago
Next Article