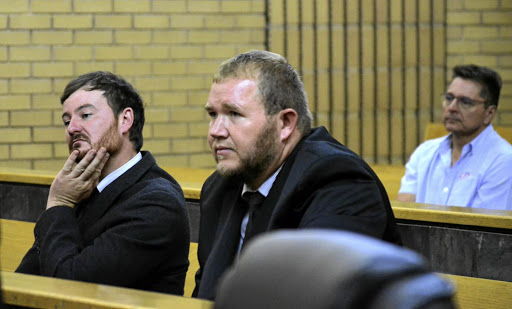 The two men from Coligny in the North West who were convicted of the April 2017 murder of teenager Matlhomola Mosweu were on Friday granted bail pending leave to appeal against their conviction.

AfriForum made the announcement on Friday.

In a statement, the organisation said that Pieter Doorewaard and Phillip Schutte were each granted bail of R20,000 after appearing in the North West High Court before Judge Ronnie Hendricks, who had earlier found them guilty of killing Mosweu.

Represented by Adv Barry Roux SC, the pair successfully petitioned to get leave to appeal to the Supreme Court of Appeal.

AfriForum released a statement in which it quoted Pieter Karsten, Doorewaard's uncle, after the court’s decision to grant the two men bail.

Karsten said: “We are extremely relieved and grateful. There is no way that the darkness of a lie will overshadow the light of truth. We believe and we will continue to believe.”

“We know the men are innocent and they do not deserve to be in prison for a day longer. They have been in detention for 13 months and it is 13 months too long,” he said.

He said AfriForum would continue to pay the legal costs for the appeal process.

Schutte and Doorewaard had been found guilty of the crime in October 2018, when their bail was revoked.

It was only in March 2019 that they were handed their sentences of 23 and 18 years in jail respectively.

Delivering his judgment at the time, Hendricks had described the actions of the two men as a “disgrace” and “appalling”.

Mosweu was killed after being accused of stealing sunflowers, though it was unclear how many of them there were or what their value was.

The judge said according to the version of the sole witness in the case, Bonakele Pakisi, a gunshot was heard in the sunflower field.

Schutte emerged in a bakkie, while Doorewaard was on a quad bike.

“You picked up the deceased from the van and threw him on the ground. It was not necessary. If you wanted action to be taken against him, you could have used other methods for him to be apprehended,” said Hendricks.

Hendricks said as if that was not enough, the pair had noticed Pakisi and forced him to get into the bakkie.

“You kidnapped him, assaulted him and forced him to drink alcohol, and you also pointed at him with a firearm, and his cellphone was also taken away from him,” he said.

He said the incident had divided the small town of Coligny.

“The community of Coligny was terrorised by this incident,” he said.

Hendricks said the offence was not planned or premeditated.

“It happened on the spur of the moment. There was no direct intention to kill the deceased.”

Mosweu's mother, Agnes, had rejoiced after the sentencing.

“I am happy. I will finally be able to sleep at night knowing that the killers of my son are locked behind bars,” she said.

Phillip Schutte and Pieter Doorewaard are expected to hear their fate on Wednesday as judge Ronald Hendricks  hands down  sentence.
News
2 years ago

Three witnesses are expected to testify ahead of sentencing procedures at the North West high court on Monday.
News
2 years ago
Next Article