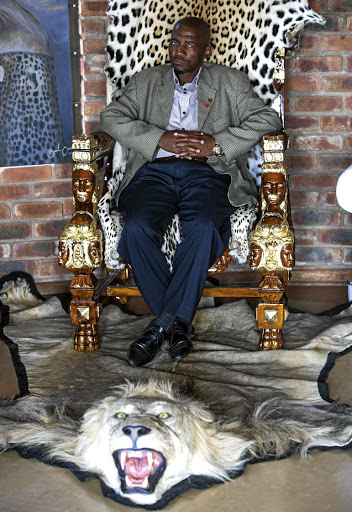 Tributes are pouring in for the late Xhosa King Zwelonke who passed on on Wednesday after he was rushed to hospital.
Image: Simphiwe Nkwali

Shock and praise has met the news of the death of 51-year-old Xhosa king Mpendulo Calvin Zwelonke Sigcawu.

The king died yesterday in Mthatha's Nelson Mandela Academic Hospital after he was rushed there by ambulance on Wednesday evening, said the king's uncle, Chief Xhanti Sigcawu.

He had been ill for over a year, but the nature of his sickness was never disclosed.

"I am deeply saddened by the untimely passing of His Majesty King Zwelonke whose contribution to the development of the institution of traditional leadership is beyond measure,"Dlamini-Zuma said.

Late yesterday, about 50 subjects, traditional and political leaders had gathered at the king's Nqadu Great Place at Willowvale.

A spokesperson for the king said a large meeting of all parties would be held at Nqadu at 10am tomorrow.

Xhanti said: "We are devastated about this as the family, but we still have to meet and inform all the people close to the family."

Zwelonke has been the Xhosa king since the death of his father, King Xolilizwe Sigcawu, in 2005.

Tribute continued to pour in from across the country yesterday, describing the late king as a strong developmental leader, a uniting figure, and a patriot.

The king was also praised for championing youth development and sport and worked hard in developing his people through his foundations - the King Zwelonke Legacy Projects, King Zwelonke Foundation and other structures.

Eastern Cape ANC provincial chairperson and premier Oscar Mabuyane committed his government to working closely with the family to take the process forward to its logical conclusion.

"The king will be sadly missed. He had very strong views. Even at night when he called me we spent an hour or two hours on the phone, sharing strong views on a particular matter.

"He was a man of clarity on whatever that he believed in. He was not just a king for himself, he was a king of his people. As a government, we have lost a serious social partner," Mabuyane said.

Contralesa provincial secretary Chief Mkhanyiseli Dudumayo said the king did not only love his people, but all nations and communities and had made more friends among many nations.

"The loss is not only of amaXhosa and amaTshawe, but of all us and all our nation. He was people's king," said Dudumayo.

"We suffered a great loss. He was a king that we saw strive for unity in the disunity that was there after the determination of the Nhlapho Commission in 2010.

"King Zwelonke respected all kings and nations. He was a progressive and respectful king," said Ndamase.

UDM president Bantu Holomisa said the king's death was a terrible loss for the Xhosa people and SA.

Zwelonke, was also known for being outspoken, and did not hesitate taking on controversial issues, more so those affecting his people.

He'll be remembered for challenging the movies Inxeba and Umthunzi Welanga which he believed sought to belittle the initiation custom of Xhosa men.

The Commission for Gender Equality (CGE) has reacted with “dismay” to the “unfortunate utterances” attributed to AmaXhosa King Mpendulo Zwelonke ...
News
5 years ago

AmaXhosa King Mpendulo Zwelonke Sigcawu has backed the formation of a new political party by traditional leaders who accuse the ANC of side-lining ...
News
5 years ago
Next Article