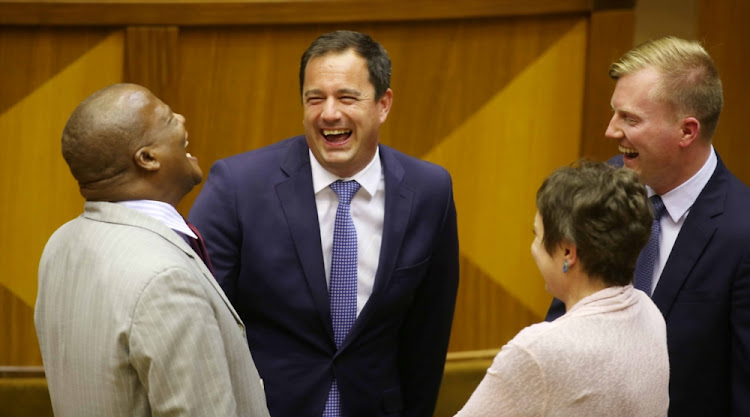 The official opposition, DA, will this weekend go for another showdown in the race to elect its interim leader.

This comes after former leader Mmusi Maimane's shock resignation last month, just a few days after his former ally, turned foe, Helen Zille, was elected as the chairperson of the federal council.

Zille had handed over the reigns as party leader to Maimane in 2015, but made a surprise come back last month when he defeated Athol Trollip for the position.

Trollip's position of federal chairperson is also up for grabs after he also resigned in support of Maimane, just a few days after City of Johannesburg mayor, Herman Mashaba, quit the party citing Zille's election as the reason.

The resignations have left the DA leaderless and in crisis mode.

On Sunday, around 160 members of the DA's federal council will decide on who will be the interim party leader between parliamentary leader John Steenhuisen and Gauteng MPL Makashule Gana.

'The buck stops with the leader': John Steenhuisen on Mmusi Maimane's exit as DA leader

DA parliamentary leader John Steenhuisen has come out in support of the party’s review report, which led to Mmusi Maimane’s resignation
News
2 years ago

The two were left in a two-horse race after Western Cape leader Bonginkosi Madikizela withdrew his name from the race earlier this week, citing his commitment to Western Cape.

Steenhuisen was elected unopposed as Parliamentary leader due to Maimane's resignation and is seen as a front-runner in the race.

Gana represents the grouping that were Maimane's strongest allies in his last days of an intense fight over the direction of the party.

"The likely possibility is that Steenhuisen is going to win and that Gana will not carry the day and this is a precursor for the election next year.

"If Gana were to win, it would be a real shock, a surprise, given the odds which are not in his favour," said Fikeni.

Fikeni said when Steenhuisen is announced as a winner, the outcome would be setting stage for a final showdown.

"Another black candidate may be put forward as a last ditch effort to make an impression and if that fails, you might begin to see a significant number of blacks leaving the party," he said.

He cautioned that if another black candidate contests, but is seen as a person endorsed by the "establishment", they will be seen as a "token".

"The difference between Steenhuisen and Gana is largely the issue of race and identity within the DA's policy framework, you are beginning to see a retreat by people who had experimented with the notion of having a black leader to attract blacks."

Meyer currently serves as deputy federal chairperson, while Mbombo is the leader of the DA Women's Network.

Will the DA choose Leon lite or Maimane reloaded?

The DA's Bonginkosi Madikizela's withdrawal from the race before this weekend's congress presents an opportunity to choose Tony Leon lite (John ...
Opinion
2 years ago