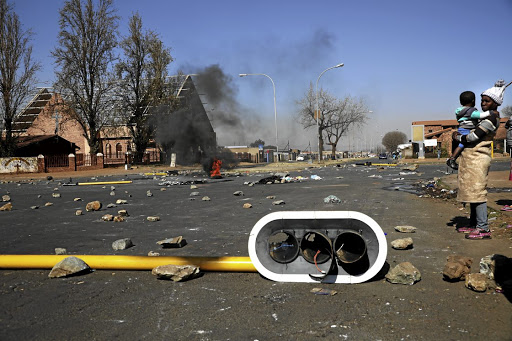 Residents of Rockville blockaded Kunene Street in protest against the electricity cuts that have hit the area. / SANDILE NDLOVU

Soweto's electricity debt has been a headache for Eskom for decades, despite efforts to recover the money from residents.

The power utility's spokesperson, Dikatso Mothae, declined to share how far back Soweto's debt went and only described it as "historical".

"The debt is growing monthly due to nonpayment, short payments and increase of interest because of the outstanding debt on the individual accounts," she said.

But a source at Eskom told Sowetan that the debt was first passed from the City of Johannesburg to Eskom in 1993 and was written off in 1998.

He further said that new debt was accumulated after that and was again written off in 2003.

Mothae was also unable to state how the debt is spread across the sprawling township.

Mothae said Eskom has tried to curb the rise in the debt by installing prepaid meters but they were not helping.

Power restored in Dobsonville as Eskom continues to pounce on offenders

After clashes with police and the shooting of actor Patrick Shai, electricity has been restored in Dobsonville, Soweto.
News
2 years ago

"In addition, we have been identifying customers who have not purchased electricity units, audited, disconnected and raised or issued remedial notices to the said customers," she said.

Eskom, she said, has also been disconnecting illegally connected consumers.

But some of these interventions were met with resistance.

"The customer resistance play a major role in Eskom's efforts to curb the energy losses and collect revenue.

"However, Eskom is deploying a multifaceted approach to ensure that we improve on the Soweto debt. There are some gains so far and we are committed to continue with our efforts," Mothae said.

Back to the Dark Ages in Mapetla

It is midday in Mapetla, Soweto, and the sun is blazing. When entering this part of the country's biggest township, the first unusual thing that ...
News
2 years ago

The resistance to prepaid meters made headlines in 2015 when Eskom tried to compel Orlando households to switch, which resulted in violent protests.

The ANC, which ran the City of Joburg, criticised the power utility on its move. Power was later restored.

During the tour of the township, Sowetan observed that some of the houses have wires directly connecting the house to the street light pole. The electricity is then shared among up to eight tenants living in shacks in the yard.

This places serious strain on the system as the infrastructure is not designed to carry such a load.

"Our government has let us down and has forgotten that we voted for it."
News
2 years ago

There is sense of despair among Soweto residents over the historical debt they owe Eskom as they feel it is impossible for them to pay.
News
2 years ago

The urgent application brought before the South Gauteng High Court in Johannesburg by Soweto residents to get their electricity back and pay a ...
News
2 years ago
Next Article