Back to the Dark Ages in Mapetla 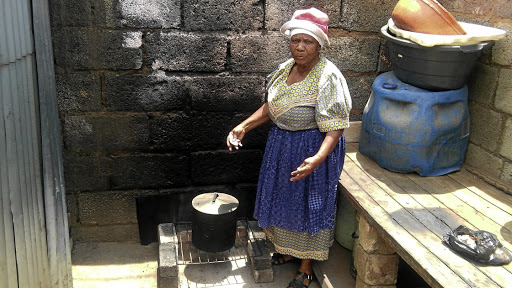 Emily Letlhaka, 78, of Mapetla has gone back to old ways of living as Eskom won't fix a damaged transformer. /PENWELL DLAMINI

It is midday in Mapetla, Soweto, and the sun is blazing. When entering this part of the country's biggest township, the first unusual thing that strikes you is the strange silence in the area.

There is none of the local music that normally plays around this time from various homes as pensioners listen to their favourite radio stations.

Emily Letlhaka, 78, has had her breakfast and her son is busy washing the dishes.

The breakfast was cooked on an open fire outside the house because about 130 households in Mapetla have not had electricity for the past five months.

A transformer along Sekoati Street malfunctioned in July and residents say Eskom told them it would not be fixed until they settled their debt.

Letlhaka tells Sowetan that Eskom personnel had since come and asked for R6,000 from each household to reconnect the transformer.

She says she was disturbed by this as she had agreed to the installing of a prepaid meter about five years ago and had thought her family had entered a new era in dealing with its Eskom debt.

Power restored in Dobsonville as Eskom continues to pounce on offenders

After clashes with police and the shooting of actor Patrick Shai, electricity has been restored in Dobsonville, Soweto.
News
2 years ago

At the time of installing the prepaid meter, Letlhaka owed Eskom about R21,000. The debt has now ballooned to R32,000.

She lives with her four children and seven grandchildren. None of Letlhaka's children are working and everyone survives on her pension.

Her family now has to use candles and a primus stove, but it is not Letlhaka's favourite cooking utensil.

"I don't like pap cooked on a primus stove," she says.

"I go outside to cook pap. I've cooked using wood before."

She then takes Sowetan to where her pap is cooked next to a shack at the back. She has piled wood between the shack and the wall separating her house from the property next door.

Three houses away is Ruth Motsamai, 63. She lives with her three children and four grandchildren. None of them are working.

"Our government has let us down and has forgotten that we voted for it."
News
2 years ago

Motsamai has been able to make a little income by selling beer in her house but that business has gone up in smoke as there is no electricity.

Motsamai also took a prepaid meter when it was offered years ago. But she does not remember how much she owed at that time. Actually, she says, the letters from Eskom stopped being delivered and she thought her debt had been scrapped.

"People are crying because of this situation. It is difficult."

Mapetla residents shut down their part of the township in the hope that it would compel Eskom to reconnect them but that did not work.

According to some of the residents, of the 130 households without electricity, only four had their bills in order.

One of them is Tsholofelo Morwa. She produces her Eskom bill and it is paid up. But she has suffered like everyone else.

"I asked [the] Eskom people why am I being punished while my bill is up to date and they said they can't selectively switch on my house on the transformer," Morwa says.

She spent R23,000 installing solar panels on the roof and also bought a generator. She uses a gas stove to cook.

"We've reversed back to the Stone Age. Living without electricity is expensive."

There is sense of despair among Soweto residents over the historical debt they owe Eskom as they feel it is impossible for them to pay.
News
2 years ago

The urgent application brought before the South Gauteng High Court in Johannesburg by Soweto residents to get their electricity back and pay a ...
News
2 years ago

Actor and activist Patrick Shai is planning to take the police to task after he was shot 11 times with rubber bullets during a protest in ...
News
2 years ago
Next Article