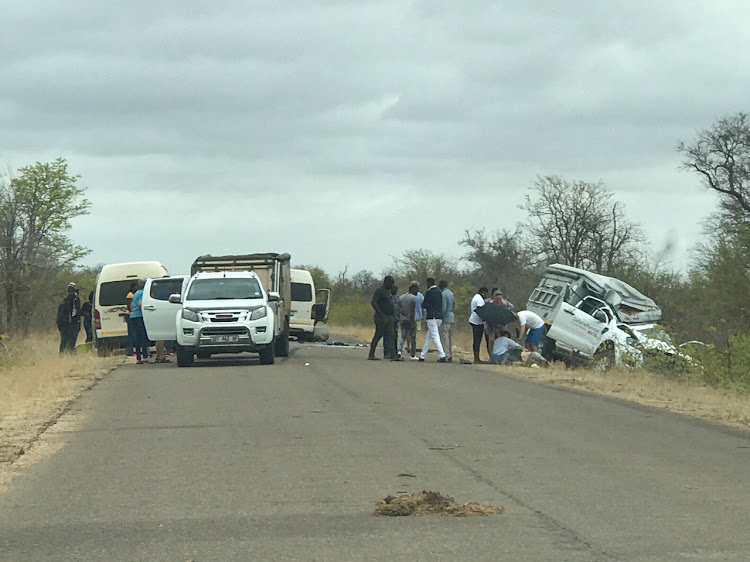 A tourist is in a critical condition in a Johannesburg hospital after a giraffe fell on to his bakkie.
Image: Connie Oosthuizen

A woman who came across the aftermath of an accident that left a giraffe dead and a Swiss tourist critically injured in the Kruger National Park described the scene as “truly unbelievable”.

Connie Oosthuizen was on holiday when she came across two battered vehicles in the park on Sunday.

When she slowed down, she saw a man lying on the ground near the open door of a safari vehicle.

“A small group of people were tending to him. We were told that the minibus had collided with a giraffe, which had then been thrown into the path of the oncoming camper. The giraffe was stone dead — a mercy, in my opinion. It had either been thrown or had staggered down the bank behind the camper, where it now lay,” she told TimesLIVE.

SANParks said it appeared the giraffe had stepped into the road and been hit by an oncoming vehicle carrying 13 day passengers. It then fell onto a rented safari vehicle driven by the tourist.

The Swiss tourist who was critically injured when a giraffe fell onto his vehicle in the Kruger National Park has been taken to a Johannesburg ...
News
1 year ago

Oosthuizen said she was stunned by the carnage in the park, where the speed limit is 50km/h.

“One simply doesn't expect to come across an accident of this nature,” she said.

Oosthuizen was approached by a man at the scene and asked for first aid equipment.

“Sadly we had nothing more than everyday items, Elastoplast and so on. He explained that his daughter, who was trained in first aid, was doing what she could, but lacked the necessary equipment.” 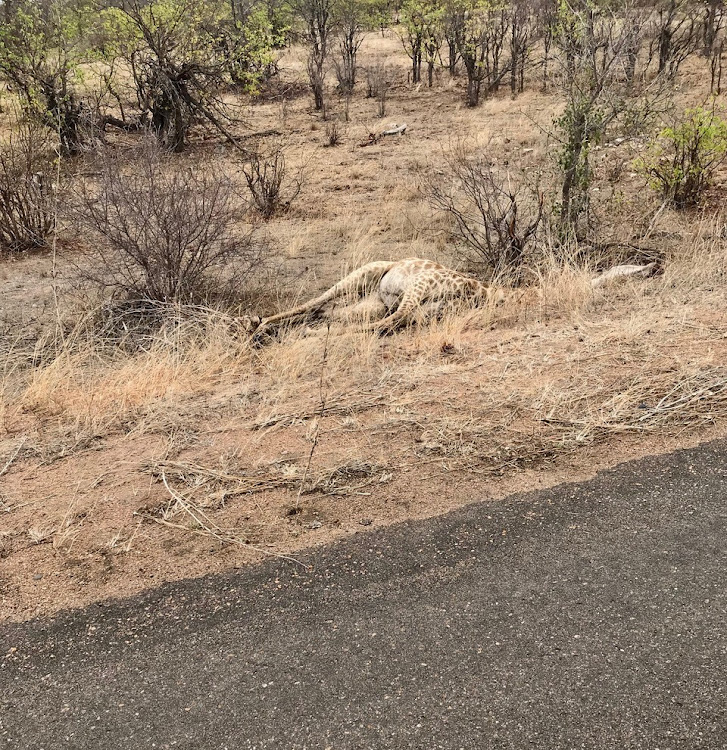 The giraffe died after being hit by a minibus.
Image: Connie Oosthuizen

There was no cellphone reception to call for help. “The injured man was in bad shape. The cab roof had been crushed. Miraculously, the woman who we took to be his wife seemed unhurt, but in shock,” she added.

The minibus driver had clothing wrapped around his bleeding head.

“Since we had neither significant medical supplies or training, and since folk were already doing what they could, we thought it best to move on, so as to avoid obstructing the road and to call for assistance as soon as we could get signal,” Oosthuizen said.

“We can only hope that the injured man makes a full recovery, for his sake and that of his family. What a terrible end to a much-looked-forward-to holiday,” she said.

SANParks spokesperson Ike Phaahla said the tourist was in a critical condition on Wednesday. “This is why he had to be transferred to a Johannesburg health facility.”