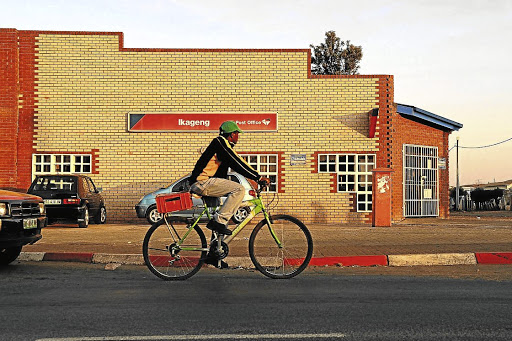 The cash-strapped parastatal pays more than 70% of its revenue on salaries and perks. / Tsheko Kabasia

Executives at the SA Post Office (Sapo) have bemoaned the high and unsustainable cost base at the cash-strapped parastatal, especially salaries and perks, which gobble more than 70% of its revenue.

Sapo executives told MPs yesterday a process was under way at the parastatal aimed at reducing staff numbers and increasing productivity.

In addition to the possible retrenchments, the contract it signed with the SA Social Security Agency (Sassa) for the payment of social grants to approximately 11-million beneficiaries would go a long way towards putting it on sound financial footing.

Based on current forecasts, gross revenue expected from this project is R1.9bn per year.

It said during the 2019/2020 financial year it would launch its e-commerce platform, which will meet increasing demand and positively contribute to revenue.

The branch network will be rationalised to minimise rental costs of approximately 114 urban branches.

Sapo employs about 23,000 people and operates more than 2,400 postal branches around the country.

Why SOE chiefs must be vetted

The government has begun with laudable moves to root out corruption and mismanagement at state-owned enterprises (SOEs).
Opinion
2 years ago

In its recently tabled annual report for the 2018/2019 financial year, it recorded a R1.1bn loss, which was R95m more than the prior year. It received a qualified audit opinion and doubts have been raised about its going-concern status.

In a submission to members of parliament's communications portfolio committee yesterday, Sapo executives said the restructuring would be done in a phased approach and 776 employees will be leaving at the end of the month through voluntary severance packages.

Employees were invited to apply for the package in October and a total of 2,839 quotations were requested.

Sapo said the 776 applications approved would realise savings of R17m a month. A total of R204m per year in benefits would be paid out, which is below the target of R320m.

Furthermore, the reduction of labour-related costs such as overtime and extended hours will reduce the expenditure on employees. Subject to negotiations with organised labour, some functions could be outsourced.

Sapo has also been hamstrung by vacancies in key posts, including that of CEO and CFO.

Its CEO Mark Barnes recently resigned following a disagreement with the government and the board on their decision to separate Sapo and Postbank. Barnes's vision when taking the job to rescue Sapo was to to provide mail, logistics and financial services in one entity.

MPs heard that Sapo had not been profitable in the past 13 years, except in 2006, when a profit of R276m was recorded, which excluded the subsidy received from the government.

From 2001 to 2012, the subsidy amounted to R300m per year. It was temporarily halted in 2012/2013, which along with a four-month-long wage strike in 2014 contributed to losses of more than R800m. The government recently granted Sapo R1.5bn over the medium term, and a further R2.9bn to fund future capital expenditure.

Executives said the funding received had been used to settle creditor backlogs, staff conversion from part-time to permanent and staff salary increases.

See which public officials earn more than the president in RSA

Top executives in at least 24 government-funded agencies earned more than Jacob Zuma in his final year as state president.
News
3 years ago

The capital city is on fire, but its mayor is in China, and won’t be cutting his trip short.
News
2 years ago

President Cyril Ramaphosa has deflected questions on the future of finance minister Nhlanhla Nene‚ saying he was "hard of hearing."
News
3 years ago
Next Article