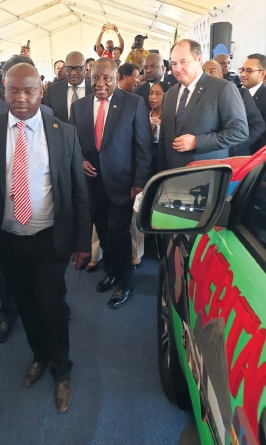 Gauteng has cemented its status towards being the capital of SA's motor vehicle manufacturing industry by launching its first automotive special economic zone (SEZ).

This is part of the greater to plan to make Tshwane the country's automotive hub.

The special economic zone is the brainchild of automotive vehicle manufacturer Ford Motor Company and will see at least R3.6bn in projected investment being pumped into the project.

When delivering the keynote address at the event at Ford Motor Company Southern Africa, in Tshwane, Ramaphosa said the SEZ was an affirmation of growing investor confidence in the country.

"It is my pleasure to be here to celebrate the launch of the Tshwane Automotive Special Economic Zone," he said, adding that the first phase of the project was set to create
almost 7,000 direct jobs.

When the project is completed in 2021, hundreds more indirect jobs are expected to be created as the SEZ will be buzzing with automotive component suppliers and related service providers.

"I am pleased to note that the 18 companies that have been engaged to set up operations in this SEZ are already revving their engines and are raring to go, with nine already confirmed to set up factories here by January 2021," the president said.

Ramaphosa revealed that Ford SA proposed to form the Tshwane Automotive SEZ as it wanted to expand its automotive footprint in SA through attracting its global suppliers into the country.

"South Africa is the continent's largest automaker and our automotive sector exports are steadily climbing - having recorded a 19% growth this year, compared to 2018," he said.

"Not only will this automotive SEZ catalyse further growth in a sector that is the mainstay of our national industrial base, it will also bring jobs, support local businesses and spur growth in the city's economy," he said.

"Once operational [the SEZ] will support SMMEs, especially black-owned businesses, to perform value-added sub-
assembly to Tier 1 suppliers of the Ford Motor Company."

Ramaphosa said the investment was "immensely encouraging, and comes at a time when business, government, labour and civil society must work together to resolve the challenges of slow economic growth and unemployment".

This follows the application from the Gauteng government to the minister of the department of trade & industry for the expansion of OR Tambo International Airport SEZ licence to incorporate the Tshwane automotive SEZ. Lance Schultz, the chief executive officer of Automotive Industry Development Centre, which is collaborating with Ford on the project, said they developed a mixed used spatial development plan with a design ethos of being a productive city, living city and green city.

"AIDC is the designated operator of the Tshwane Automotive Special Economic Zone, therefore responsible for the implementation of the project from the design phase to operational phase.

He added that the SEZ would be built in phases over 162 hectares of land with a total production impact valued at R43,8 billion.

Gauteng Premier David Makhura said the Tshwane Automotive City was going to see significant investments and job creation in the Gauteng economy as a Special Economic Zone for the automotive sector.