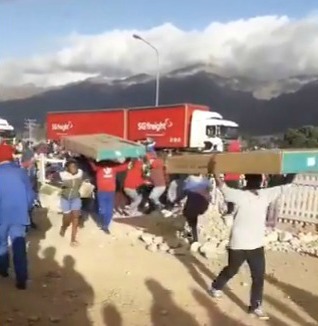 Video footage showed trucks being looted on the N1 at De Doorns in the Western Cape on Thursday.
Image: Twitter/Cikizwa Omhle Madlolo

Police reinforcements were called to De Doorns in the Western Cape on Thursday, as looters ran amok on the N1 highway, stealing big-screen television sets from stationary trucks.

“Public order policing and other law-enforcement agencies are on the scene in De Doorns, where community members embarked on a strike. Two trucks were reported looted. Police are following up on the people who looted the truck. No one has been arrested so far and the traffic has been diverted,” said police spokesperson Sgt Noloyiso Rwexana.

This is what criminals are doing in De doorns this is not acceptable pic.twitter.com/6x9HSjTPTc

The N1 has been closed in both directions before De Doorns, with provincial traffic chief Kenny Africa saying the situation is “volatile”.

“They are stoning cars and looting trucks. It's unsafe to use the N1 until such time as the police are able to get this thing under control. Motorists should avoid the area if possible.”

Videos circulating on social media show looters making off with flat-screen television sets and other goods, with dozens of people swarming around two trucks.

One of the trucks looted on Thursday was operated by SG Freight. The company's Nicholas Pillay said the vehicle was transporting spices worth an undisclosed sum of money.

“It is becoming a real problem. There was another incident on Monday, where they stopped the driver and stole his keys,” he said.

“The driver from today is safe. They stoned the vehicle and stole the batteries. They took the whole load.”