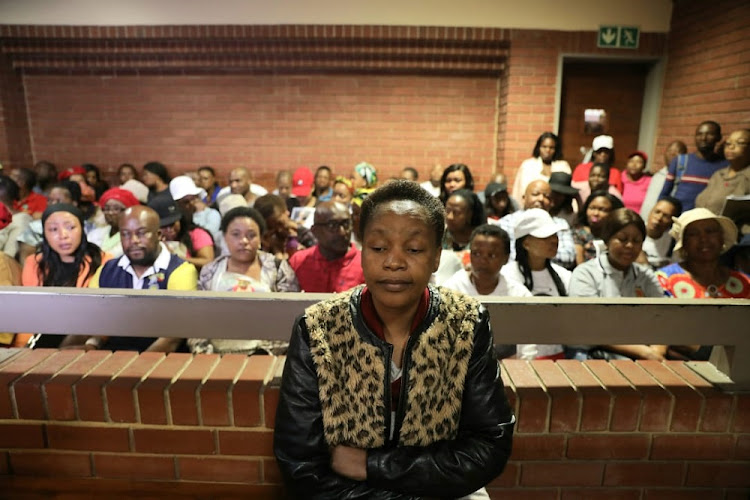 Dozens of Daveyton, East Rand, community members are gathered outside the Benoni magistrate's court where a nanny, Mannana Celinah Tsabane, 39, who allegedly killed a toddler she had been minding for over a year is appearing. Tsabane is expected to apply for bail on Wednesday.

She faces a charge of murder and attempting to defeat the ends of justice.  Her matter was postponed last week as the docket was still with the Director of Public Prosecutions for consideration.

Simphiwe Majola, a member of public who was in court to support the family, said he was appalled by what the nanny allegedly did. “We are very upset by what happened. It can’t be that someone who was left to care for a baby kills that very same baby. The family trusted her. She claimed that there were five men who wanted to kidnap the child and killed him. It’s not right. She must not be granted bail,” Majola said.

The courtroom where the Tsabane was expected to appear was packed with supporters carrying pictures of the toddler.

One-year-old Lihle Mnguni’s lifeless body was found in one of the rooms in his home after the nanny allegedly murdered him.  His father Sihle Shabalala previously told the Sowetan that the postmortem report indicated that Lihle died from strangulation. “We feel betrayed and hope that she doesn’t get bail. We hope she will face the full might of the law,” Shabalala said.

#LangelihleMnguni Tsabane has indicated to the court that she would like to apply bail. The matter is postponed to the 8th November 2019 for a formal bail application @sowetanlive pic.twitter.com/ejswNJWqDO