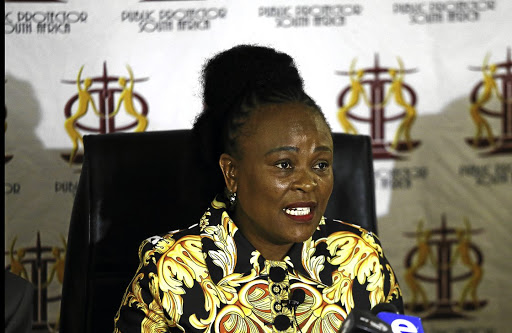 Yet another report by public protector Busisiwe Mkhwebane's office is being taken on review in the courts.

Civil society organisation #UniteBehind announced yesterday it had submitted a review application to the North Gauteng High Court in Pretoria against Mkhwebane's "whitewash" April report into corruption and maladministration at the Passenger Rail Agency of SA (Prasa), requesting that the report be set aside.

Mkhwebane's investigation stemmed from the findings of her predecessor Thuli Madonsela, who in 2015 released the "Derailed" report, which revealed corruption at Prasa under the board of former chairperson Sfiso Buthelezi and his then chief executive, Lucky Montana. Madonsela deferred some aspects of the investigation to a follow-up probe.

#UniteBehind filed the application after close study of Mkhwebane's report revealed it was, in short, a "whitewash".

'No security' at 18 out of 19 public protector offices, parliament told

Only one of the public protector's 19 offices has security services, parliament's justice and correctional services portfolio committee was told on ...
News
2 years ago

"The seriousness of the deferred complaints, and the need for an effective investigation cannot be doubted. They concern allegations of financial mismanagement, procurement irregularities, improper expenditure amounting to billions of rands of public funds, and abuses of office by the most senior management at Prasa," it said.

"Mkhwebane did almost nothing to further the investigations. She did not obtain a single new piece of evidence. She interviewed only three new people, none of whom were implicated in the allegations, and appears not to have issued subpoenas.

"None of the whistleblower employees in Prasa, who had alleged intimidation and victimisation, were interviewed. No search and seizure operations were conducted.

"Further, the remedial action in the Prasa II report is wholly inappropriate and ineffective."

The public protector's office has received a rave review from the auditor-general about the office's financial health and financial management.
News
2 years ago

It believes Mkhwebane's report is "evidence again of [her] failure to appreciate the nature and importance of her constitutional function".

"[Mkhwebane] has produced a report that can give the public no confidence that the complaints have been properly investigated, that the truth has been uncovered, or at the very least that a concerted and committed effort has been made to uncover the truth."

It said the report led to two "ineluctable conclusions" - that she was incapable of performing the functions of her office effectively, or that she had acted in bad faith and for an ulterior motive.

Mkhwebane's office has two weeks to file its response.

The public protector's office has received a rave review from the auditor-general about the office's financial health and financial management.
News
2 years ago

Public works and infrastructure minister Patricia de Lille's sister, Cynthia Jeffreys, resigned from her job in the ministry just 11 weeks after her ...
News
2 years ago
Next Article