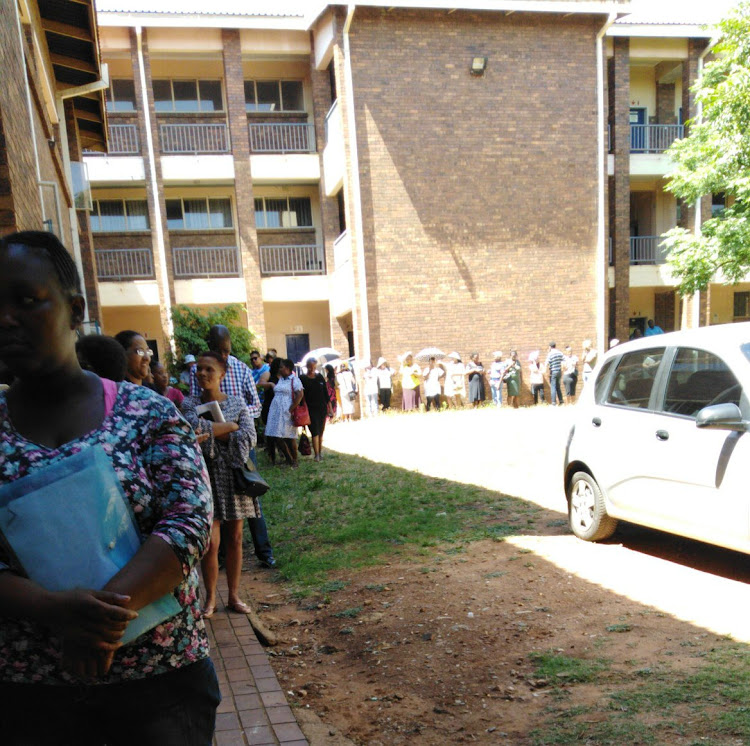 Parents queue for places at schools for their children in Gauteng on Sunday, November 3 2019.
Image: Twitter/@MaNdlovuP_1802

The placement period for admissions of children in grades 1 and 8 at state schools in the province was scheduled to close on October 31 but a day before the deadline there were  about 77,000 parents who had neither declined nor accepted placement offers for their children.

District offices were open on Sunday to deal with the backlog. But the process did not go smoothly.

Lesufi said in a series of tweets on Sunday that the “majority of our ‘good schools’ are full and we are trying to find proper alternatives”. He said no pupils would be left without a school.

Some parents took to social media saying they had queued for hours and were then informed the “system is down”.

Others were circulating a petition calling for the cancellation of the Gauteng education department's online admission system.

@Lesufi also, why are we applying in May only to be summoned in the last minute in November?? Is online application not supposed to provide convenience??? P.S your computers are not working! ? #gautengeducation #panyazalesufi

Lesufi said some staff had been intimidated and even attacked and they had to be persuaded to return to work.

The problem is that our staff members were intimidated and in some instances attacked. We’ve to persuade them to go back to work.We’re trying to resolve the impasse as soon as possible.The major problem is parents who didn’t accept offers and those who didn’t submit documentation https://t.co/muQlNIkOpp

“We’re fully aware of what’s happening at our district offices. Our sincere apologies, we are getting extra staff members to support us. Unfortunately being a Sunday, we don’t have a full complement of staff members but we are attending to the situation. I’m on my way to districts,” tweeted Lesufi.

“Dear parents, kindly take note: Assaulting our officials who are trying to assist, with placements can’t be tolerated. We’ve persuaded union members not to pull out their members from our district offices however if a single official is attacked we will withdraw the service,” he added.

We are working around the clock to place remaining learners. This is our latest placement report pic.twitter.com/KuS4fDrGCY

#GBEPlacements Scores of parents are queuing outside the Gauteng Education's District offices in Braamfontein. They want to have their children placed at schools of their choices. Some tell @Newzroom405 that they've been here since 7 in the morning and still queuing at this hour. pic.twitter.com/LiOUGi0zai

@Lesufi we are at Pimville gauteng department of education we received sms that if our children haven't been admitted to any school we must come here however only 2 consultants working please intervene pic.twitter.com/Dl74NzOk5M

Because parents have nothing better to do on a month end Sunday, why not summon them at the last minute! #gautengeducation @Lesufi pic.twitter.com/pXGRZ9snDA