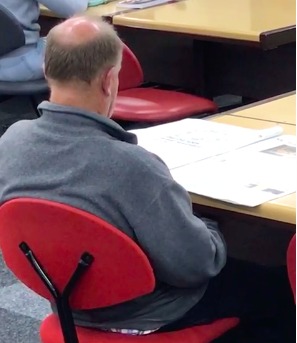 A man was removed from the Stellenbosch University library after students complained that he was engaged in an indecent act.
Image: Screengrab

Stellenbosch University on Friday cleared a man who was marched out of a library on Tuesday for alleged inappropriate behaviour.

A video circulated on social media showing the man in the middle of the populated library hunched over and purportedly committing an indecent act on Tuesday. A second video clip showed the man being led out of the library in handcuffs, escorted by campus security.

The man had reportedly signed in as a visitor and is not registered as a student at the institution.

On Friday, the university said the man had submitted documentation to the institution denying any inappropriate actions.

“The man in a social media video seemingly committing an inappropriate act in the (university) library, submitted a sworn statement, supported by [a] medical certificate, denying any inappropriate actions,” the university said.

The institution said a doctor's examination confirmed a diagnosis that was consistent with his account of events.

Stellenbosch University is investigating claims that a man had to be hauled out of the library commons on campus after he was allegedly caught ...
News
2 years ago
Next Article