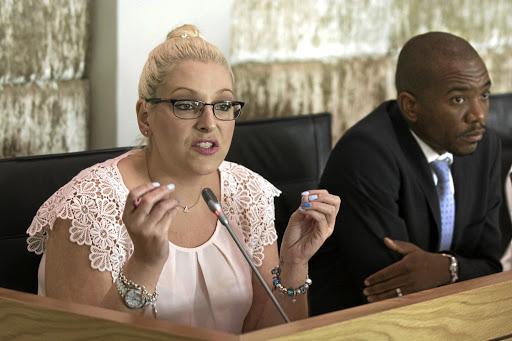 'On the shoulders of giants': Natasha Mazzone has become the first female chief whip of the DA.
Image: Trevor Samson

Natasha Mazzone is the new chief whip of the DA. Her appointment was announced to the party's caucus in parliament on Thursday morning.

“In the interim we are trying to create some stability here in parliament. She helped write the rules of parliament, she is competent and knows what needs to be done and that's going to help manage a smooth transition in this period,” said Steenhuisen.

Throwing billions at Denel won’t fix the troubled state-owned arms manufacturer which is in need of an overhaul, says the DA’s Natasha Mazzone.
News
2 years ago

Steenhuisen said he was trying to show South Africans that there had been setbacks, but the show would go on.

Mazzone fills the vacancy left by Steenhuisen, whose term was linked to former party leader Mmusi Maimane who quit the party last week.

“I am deeply humbled by the faith shown in me by the parliamentary leader and my party. I obviously step into massive shoes and look forward to the challenge,” said Mazzone.

“It has been a very difficult period for the DA and I have every intention to concentrate on steadying the ship and ensuring continued excellence in the DA parliamentary benches.

“Being an MP is the greatest honour of my life and being appointed the first female chief whip of the DA in parliament is a tremendous honour. I stand on the shoulders of giants and I dare not fail them,” she said.