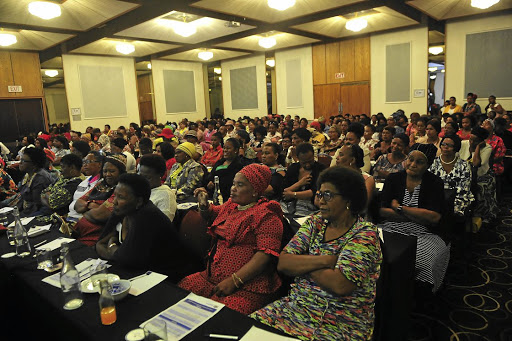 Female taxi owners in Gauteng have called for an equal representation in the executive of taxi associations in the province in order to transform the sector.

Yesterday, the female taxi owners met with transport MEC Jacob Mamabolo in Braamfontein, Johannesburg, to discuss their concerns in the sector.

Buyiswa Mehlomakhulu, one of the female taxi owners who called for the meeting, said the industry had to change and embrace the role played by women.

She also suggested that those who do not appoint women should at least have a committee which represented them.

"We also don't want women to be put in the executives just to be puppets and have no say. We want them to have a say in the running of the associations."

'The industry must be an industry, not just a combi' - MEC of transport Jacob Mamabolo as he addresses female taxi owners

Gauteng MEC of transport Jacob Mamabolo has urged women in the taxi industry to grow the sector beyond just a combi.
News
2 years ago

The meeting is aimed at developing a long-term relationship with the Gauteng department of roads and transport.

Most of the women in the taxi industry joined the sector by default after the death of their husbands who owned taxis.

Another taxi owner, Lorraine Sifuba, said: "Your husband dies with 10 cars. But within a year you are left with one car. Some of the cars break down, some of the cars are stolen and nobody says anything. If the woman is not strong enough and not willing to fight, she ends up with nothing. Taxis simply disappear."

Women also did not enjoy respect from the taxi drivers, who change their attitude after the death of their spouses.

"The drivers would bring little or no money when your husband is no longer around. They actually become disrespectful," Sifuba said.

"Daily takings can drop from R1,000 to R400. When you ask what has changed the driver simply tells you stories."

Sifuba added: "We did not come to the taxi industry willingly. We were thrown into it by circumstances of the husbands passing away. Now we have to come in.

"There is no room for fear because you have been feeding your kids with this money. Now that you husband is gone, you have to go on."

Mamabolo applauded the women for picking the baton from their husbands and urged them to use their presence in the sector to mordenise the running of taxis.

"The taxi industry is the most liquid industry. It has a lot of cash but is not used properly. It is used to buy people called izinkabi (hitmen) to murder others.

"That must change. we must look beyond the kombi (minibus)."

There is a new sheriff in town and he means business.
News
2 years ago

Small Business Development minister Khumbudzo Ntshavheni has broken her silence over allegations that she used funds raised for President Cyril ...
News
2 years ago