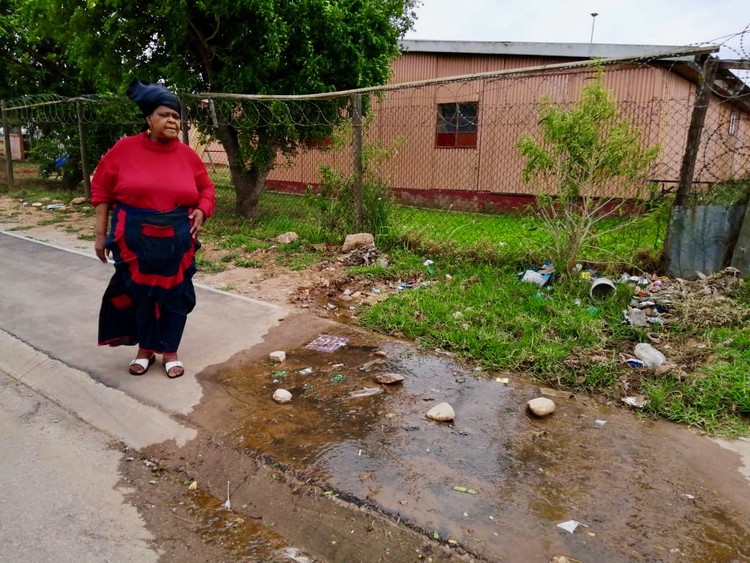 Thousands of litres of clean water have been flowing for weeks through the yard of Magamase Sitoto and down her street in KwaNobuhle, Uitenhage.

Meanwhile in her home there is no tap water or water to flush her toilet. She says she has been sent from pillar to post trying to get the leak fixed.

“It started when a group of six municipal workers arrived in my house and dug a trench … I never had a water leak problem in my house for the past 24 years I lived in it,” said Sitoto.

“The workers said there was no water in the whole area, so the problem was the valve in my yard … Before the men left, I asked them, ‘Why are you leaving a trench oozing water in my yard?’ They said they would come back the following day and fix it, but they never did.”

Nomzimasi Jonas, her neighbour, said: “The leak in her house is attracting frogs, mosquitos, bugs and cows. We have to scold children who always play in the muddy water.”

Sitoto said she phoned the municipal toll-free number, reported the problem and obtained a reference number within a week of the men digging the trench.

Then Sitoto, who is 69, went to the local KwaNobuhle council. There she met two officials. One made a phone call. She was told to go home and wait for workers who would fix the problem.

After waiting for two days, she went to the Cuyler Depot. A woman, who identified herself as Yoli, drove them to Sitoto’s house in a municipal vehicle and took photos of the problem.

“She promised that the next day, workers would come and fix it,” said Sitoto.

Another week passed. She phoned Yoli’s mobile, but it went to voicemail. Sitoto then went to Yoli’s offices and was assisted by another official, who said she would report the problem. “The woman said … I must just go home, workers would arrive,” said Sitoto.

After a few days in which still no one came, Sitoto went to the Uitenhage Town Hall. “I was told by a young man that workers would arrive the following day, a Friday. But they didn’t come,” she said.

Last week, Sitoto went to Legal Aid in despair. “I was asked what was the problem and instead of explaining yet again, I broke down and cried. They also asked for the reference number and I had lost it … I doubt that I will ever see my water woes being fixed,” said Sitoto.

Councillor Nontuthuzelo Skweyiya, who has the reference number Sitoto was given, said: “The only thing we do is phoning on behalf of the complainant and keep reminding the municipality of the complaint. We are aware of her problem and we will keep assisting her.”

Meanwhile, after GroundUp explained Sitoto’s predicament and pointed out that clean water had been flowing away for nearly two months, municipal spokesperson Mthubanzi Mniki commented: “We treat water as a scarce resource. We will send a team to fix the problem very soon. We would work around the clock to make sure it is done.”