Unity, freedom and selflessness: Ramaphosa at OR Tambo memorial lecture 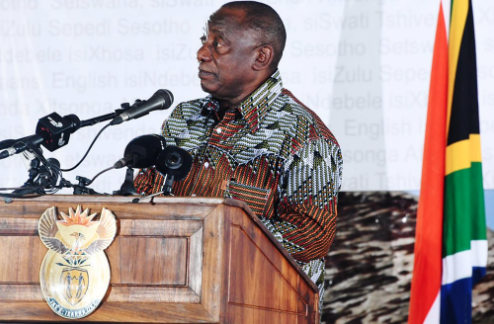 President Cyril Ramaphosa addresses the audience at the OR Tambo lecture on Sunday.
Image: Twitter/@PresidencyZA

President Cyril Ramaphosa on Sunday delivered an address in remembrance of former ANC president and anti-apartheid activist Oliver Reginald Tambo during the 2019 OR Tambo memorial lecture.

During the lecture, held under the theme “Walking in the footsteps of OR Tambo," Ramaphosa addressed issues within the ANC and called for the members of the party to adopt the lessons left behind by Tambo.

Here is his address in five telling quotes:

“He understood that nothing of value could be achieved unless we were united in all the things we did as a movement. Even in the face of danger and difficulty, when it seemed as if we were falling apart, president OR worked tirelessly to ensure the ANC and its members remained focused.”

“OR did not have any dictatorial tendencies in his exercise of leadership. He was a true democrat. He was also a builder of our liberation movement and alliances and partnerships. He was a master builder. He mobilised the whole world against the racist and murderous state of apartheid.”

“He would do whatever was asked of him to advance the struggle of people and restore the movement, even if that meant standing down as acting president of the ANC. He put the needs of the people above his own, to the detriment of his career, family and, ultimately, his own health.”

“It was a joy for me to be in KwaZulu-Natal and listen to our comrades saying 'we have embarked on a process of getting the leaders to come and be answerable and to be accountable to the ANC'. People are no longer accountable to themselves, but to the ANC.”

“Unity that was forged in Morogoro is the type that should continue to inspire us to take our movement forward. When we are divided as the ANC, SA is also divided. South Africans want to see a united ANC. Those who want to divide the ANC, the door and windows are open, go.”

EFF leader Julius Malema has made a sensational claim that it was President Cyril Ramaphosa who led to the demise of former DA leader Mmusi Maimane - ...
News
1 year ago

South Africans toasted the Springboks on Sunday after coach Rassie Erasmus' charges beat Wales 19-16 in a nail-biting semifinal in Yokohama to book ...
Sport
1 year ago
Next Article